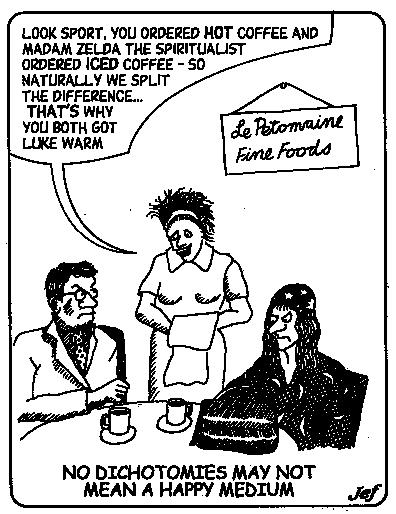 The advocate presents an issue as "black and white" when it is in reality "shades of grey". The reasoning put forward is unjustifiably "all or nothing" rather than subtle and measured. Debates about emotive issues such as euthanasia, GM foods, criminal justice, race relations etc., are often polarised in this way.

During an election campaign, the incumbent Attorney-General, Frances Payne appears on television and makes his case for a review of current censorship laws affecting television broadcasting. She states that the review of the laws will be informed by broad community consultation. The interviewer (Barbra Twining) asks Mitchell Blarneypickle (President of the lobby group Smashing Hegemony In Television) to comment. He states: "There cannot be any censorship imposed by the State... anyone should be able to hear or see anything they like... any level of censorship is oppressive."

Mitchell is portraying the issue as censorship versus freedom of speech. He is attempting to put one issue up against the other and is hoping that his version of the issue prevails in the "contest". The flawed belief at the core of this strategy is that censorship is "all or nothing". In fact, the degree and nature of censorship which might be exercised in any society is subject to multiple variables. It is perfectly reasonable for example, for standards of what constitutes obscene or violent material to change over time along a continuum. The debate should be about how far along the continuum and in which direction the standards should shift - not on whether standards should be abandoned or raised to a level of complete repression.


In the present example, and if Barbra were an effective interviewer, she would challenge Mitchell on his "all-or-nothing" stance and either dismiss it as an unworthy contribution to the debate, or probe his position with examples which would be problematic. For example, she could ask her whether he would be in favour of live broadcasts of executions on free-to-air television, or the removal of doors and screens from public toilets. Such challenging examples would be an appropriate use of reductio ad absurdum by Barbra to point out that it would be ludicrous to apply Mitchell's views without qualification. Such a challenge might provoke Mitchell and lead to his indignant exit from the debate. But it's also possible that it would function as a reality check and cause him to modify his position and engage more effectively in the discussion. Either way, whether he leaves or moderates his position, the debate would be more fruitful.


Many LAME commentators (LAME - Look At Me Everybody are unhappy with ambiguity and complexity. Such individuals prefer to characterize an issue as "black or white", as they find dealing with nuanced shades of grey difficult and confusing, and more often than not, a threat to their position. The seeker after truth on the other hand, should not attempt to over-simplify any issue in order to bring it to a premature or unjustified resolution. It is much more acceptable in principle to decide that an issue has to remain unresolved, rather than oversimplifying and drawing the wrong conclusion.