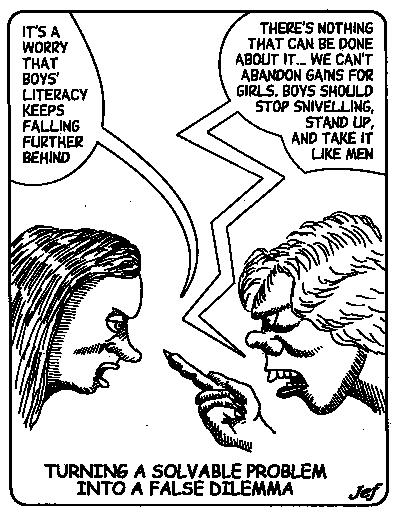 This is the error of portraying one choice as necessarily excluding another, even though there is no necessary connection. For example, an advocate might make the following statement: "They should solve world poverty before they try to put humans on Mars." While this may sound superficially plausible, the unstated and bizarre implication is that the advocate believes that if money were not expended on a Mars expedition, it would be diverted to the alleviation of poverty. This is clearly false.

Dr Harry Oversteer is an epidemiologist with an interest in health statistics. He is having a conversation over dinner with Sally Butt, an old school friend. He remarks that men's health in general is in a much poorer state than the health of women in general. He points out that on almost all measures of mortality and morbidity - from suicide to heart disease - men fare significantly worse than women. He speculates on whether there should be more health promotion programs targeted specifically at men to address this anomaly.


Sally bristles and forcefully states the following: "It's taken the better part of a century to have women's health taken seriously by a male-dominated medical profession and public policymakers. If we embark on the course you suggest, women's health will take giant strides backwards."

What Sally is saying, without any evidence or compelling logical reason, is that a focus on men's health will necessarily lead to reduction of health services to women. This is clearly not a sound coupling of events. It is even possible that an increased focus on men's health will lead to better targeted health programs across the board. In the example given, a more reasonable response from Sally might be: "I can see the anomaly you've pointed out. The issue that needs to be addressed is how men's health outcomes can be improved, while at the same time ensuring that there aren't any adverse effects on women's health. We need a response which is acceptable to the whole community."


Sally's error arises from the supposition that there is a fixed health budget and that an increase in disbursement of funds to one group (i.e. men) necessarily results in less resources going to another group. Sally is right to alert Harry to the possibility that increased health promotion targeting men may lead to diminution of emphasis on women's programs. Her error is in asserting that it definitely will lead to this outcome.


Note that increases or decreases in the expenditure of scarce budgetary resources on government programs is a legitimate topic for political debate and social commentary. It is also true that the total "cake" available for allocations to programs is necessarily limited. At times, increasing budgetary allocations to program "X" may have a clear link to a decrease in budgetary allocations to program "Y". If this is the case, a genuine dilemma may be argued and the benefits of one program can be directly compared and contrasted to the other program. The seeker after truth will be able to distinguish a false dilemma from a genuine dilemma, and will make his or her case accordingly.
Posted by Theo Clark at 5:30 pm