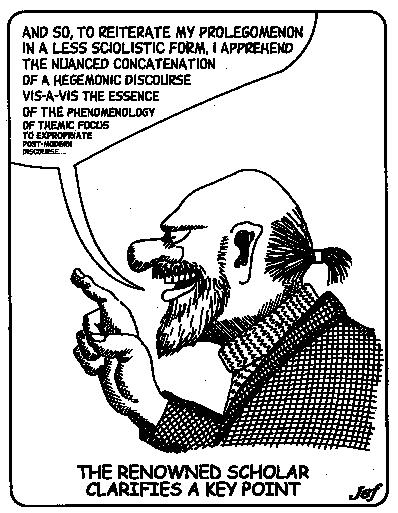 Gibberish is an argument or assertion that is so flawed in its presentation that it is essentially meaningless. When the advocate has not advanced an intelligible argument, a considered response from the opponent is a waste of time.

Gibberish is quite common in academic literature. Stephen Murray-Smith, in his book Right Words: A Guide to English Usage in Australia is scathing in his definition of this particular form of gibberish:


Academic English is a horrible corrupt dialect of the English language, used by teachers in tertiary institutions in order to sound cleverer than they really are and thus to win promotion, power and money.

The prevalence of gibberish in academic literature was also a major concern of Alan Sokal and Jean Bricmont. In their book Intellectual Impostures, they give many examples from the social sciences in particular. One is quoted here by way of illustration:


The time of this instant without duration is 'exposure time', be it over or under exposure. Its photographic and cinematographic technologies already predicted the existence and the time of a continuum stripped of all physical dimensions, in which the quantum of energetic action and the punctum of cinematic observation have suddenly become the last vestiges of a vanished morphological reality.

Advocates who use gibberish may be unaware of just how unintelligible their language is to the listener or reader. Or they may be deliberately using gibberish to obscure the issue and to avoid any possible challenge. Whether gibberish is the result of stupidity or duplicity, skeptics and critical thinkers will not be cowed by their own lack of comprehension. They are entitled to ask for clarification, and if appropriate, to draw attention to the flawed use of language.

The seeker after truth's initial response to gibberish in a verbal exchange will be courteous and pragmatic, viz: "What are you saying?...Could you explain what you mean?... Could you give an example?...You need to put your argument with greater clarity."

If mild and courteous requests for clarification are ignored, more emphatic requests might be necessary, viz: "Could you please come to the point?...I can't tell whether your position has any merit because I have no idea what you are saying... Complex ideas need to be expressed in simple, direct language... I think what you just said is essentially meaningless, but I can't tell for sure because your explanation was so garbled..."

If this still has no effect, perhaps a more confrontational approach is in order: "How can I tell the difference between what you are saying and complete horse manure?"

Note that it is critically important to distinguish between unnecessary gibberish and the use of uncommon words to convey complex ideas with precision. There is nothing wrong with an advocate using an advanced vocabulary when this is necessary to communicate an exact meaning.

The problem of obfuscation arises when an esoteric vocabulary is used in ignorance, with little or no regard for meaning, or for the effect on the listener or reader. The expansion of vocabulary to enhance the quality and precision of written expression or speech is laudable. However when an advocate engages in the indiscriminate use of meaningless words, or uses meaningful words meaninglessly, the practice should be treated with the scorn, mockery and censure it deserves.
Posted by Theo Clark at 2:37 pm