The ABC recently published an article Teachers, schools in firing line as conservatives rail against 'leftist agenda',  based on their Australia Talks National Survey. The crux of the piece is that: 'One Nation voters are turning on the mainstream education system as conservatives across the country express a deep mistrust of what they say is a "leftist agenda" taking over the classroom.'

There's nothing wrong with the story per se, but the headline and associated graphs they use send a misleading message. They show the satisfaction of voters of different parties with the education system and with teachers. 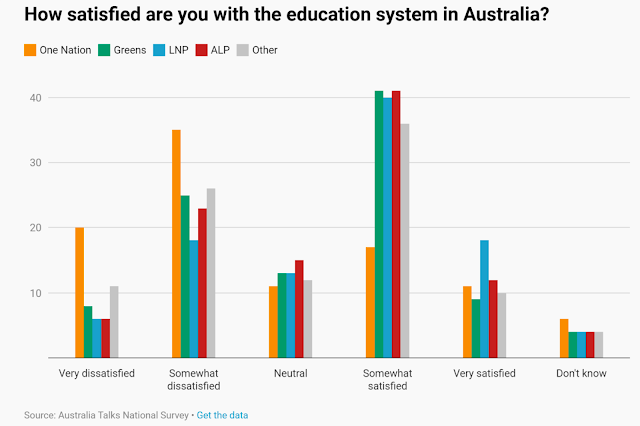 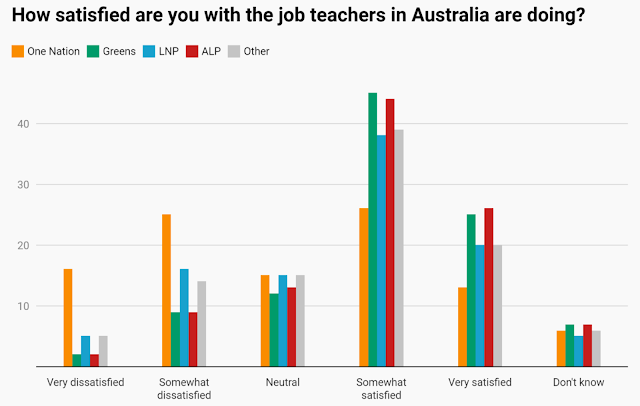 However, they are out of 100% for each party, thus greatly 'biasing' the results for parties that have a small number of voters. Consider the sizes of the orange columns, which belong to One Nation, who nationally polled 1.29% at the last federal election.

When you adjust the graphs based on the national first preferences, making them out of 100% in total, this is the result. 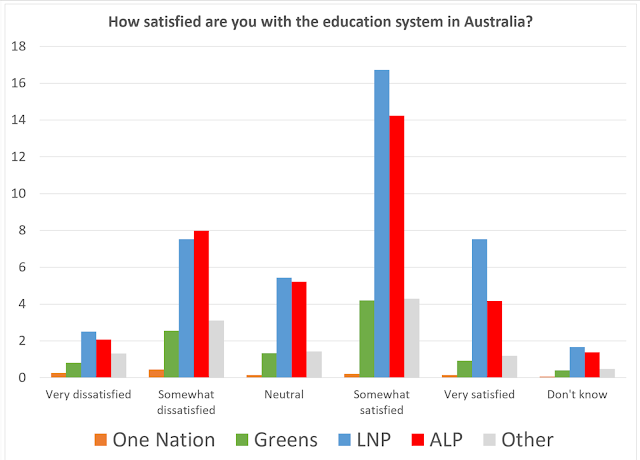 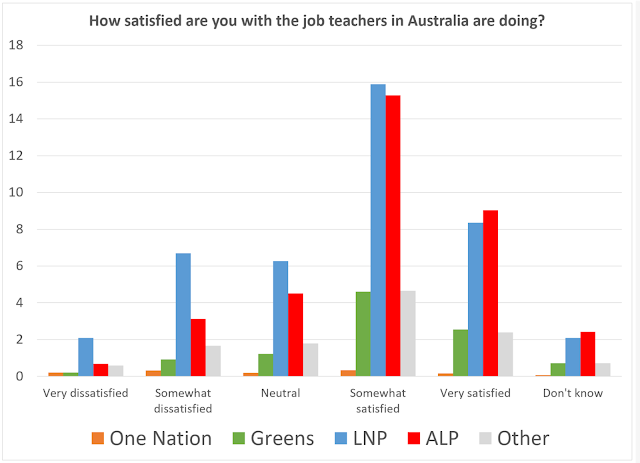 There are certainly lessons to be learned in terms of why different groups responded to the survey in this way, but it should be kept in perspective. This isn’t about ‘conservatives’, given the blue LNP would fall under that category. It’s about a small far right party that already gets quite a bit of media attention, especially when compared to the proportion of the population who throw votes their way. Further, as the article goes on to say:"[t]he root of the frustration can be traced to a wider dissatisfaction with the political landscape...", rather than the education system and teachers themselves.
Posted by Theo Clark at 9:41 am

Education guru (not self-proclaimed) John Hattie, along with co-author Arran Hamilton, list a number of fatal cognitive biases in the blog post How to stop cognitive biases from undermining your impact, which is well worth a read for any educator (or anyone for that matter). They point out that:


...a growing database of Cognitive Biases or glitches in our human operating system have been catalogued and confirmed through laboratory experiment and psychometric testing. The research suggests that biases afflict all of us, unless we have been trained to ward against them.

The post is a small part of the bigger white paper: Education cargo cults must die (pdf). It's a somewhat ironic paper, given the criticism levelled at Hattie's guru status and cult-like following. However, this is something Hattie and Hamilton are well aware of, noting the danger of appealing to authority:

Authority Bias: Tendency to attribute greater weight and accuracy to the opinions of an authority figure—irrespective of whether this is deserved—and to be influenced by it.

EDUCATION: Don’t be swayed by famous titled gurus. Carefully unpick and test of all their assumptions—especially if they are making claims outside the specific area of expertise. Be particularly suspicious of anyone that writes and publishes a white paper [!!!] (p 20, emphasis added).

Some key quotes from the white paper:

We make the case that ingrained cognitive biases make us all naturally predisposed to invest in educational products and approaches that conform with our existing worldview and to only grudgingly alter our behavior in the face of significant conflicting evidence. In section two, we argue that educators and policymakers must fight hard to overcome their cognitive biases and to become true evaluators of their own impact (p 9).

Health warning: May ultimately make you feel as though you can trust what you see again, because you’ll have a framework for identifying evidence and being more skeptical of initiatives and resources that just don’t have sufficient backing (p 10).

We advocate an approach to education that is built on reason, rather than intuition alone. This involves systematic collection of data on students’ learning experiences in the classroom and the ways in which teachers and product developers can accelerate this learning. From data, we can inform intuitions and judgements and build theories. And, from theories, we can build structured processes—continually testing and refining these too (p 25).

While there are plenty of critics of Hattie's work (and how Hattie's work tends to be used), it's great to see educators engaged in discussion about our profession and continually improving evidence/research base of our practice. Or at the very least, minimising the chances of wasting our time on myths and errant nonsense.
Posted by Theo Clark at 7:30 am

Australia is about to undertake a pointless non-binding postal survey about our views on same sex marriage (SSM), which if a majority say ‘Yes’, will see a bill before parliament that politicians will vote on. I.e. an abject failure of how representative democracy is supposed to work (there’s no need for a $120m survey for any other bit of legislation).

As predicted by everyone, the stupid has begun. Here’s one such example I came across on Facebook: 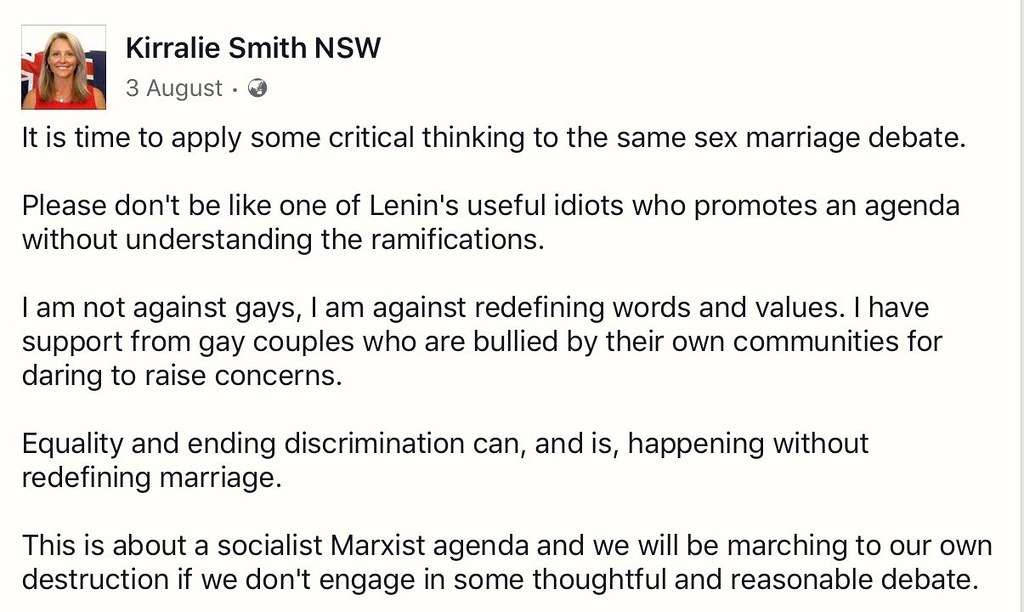 In our book, we ended our section on the slippery slope fallacy with this:


On the other hand, it is important to be aware that when people who lack the mature judgement of the authors venture onto a slippery slope, they will inevitably wallow in ever more bizarre misconceptions and fallacious reasoning until we end up with nothing but gibberish —and finally, the complete destruction of civilization as we know it.

The unironic employment of the slippery slope argument, that SSM will lead to ‘our own destruction’, may in fact be evidence that we are seeing the first steps in a series of events of poor thinking, fallacious reasoning and even more bizarre misconceptions, that will lead to the complete destruction of civilisation as we know it. Thus proving, ironically, the deliberately tongue in cheek prediction from the book.
Posted by Theo Clark at 8:50 pm

Recently the skeptical part of the internet went into yet another meltdown about women. In short, the Northeast Conference on Science and Skepticism (NECSS) withdrew their invitation to Richard Dawkins to be a featured speaker at their conference, because he, yet again, was a twitter tool. See the details here. (If you don't know why it's "yet another" and "yet again" count your blessings or google "elevatorgate", or "used to be nearly everyone's favourite big brained science dude, but now... not".)

I'm not going to discuss this in any specific detail. This is just a thought I had when reading some comments about it. (Note to self, for the millionth time: Stop. Reading. Comments!)

Normally I try to avoid using fallacies when I make a point, but in this case, stuff it, I'll make an exception because I'll still be right.

What's the deal with all the middle aged white dudes (overgeneralisation) who seem to continually be upset at the idea that women should be afforded the respect they ask for, as opposed to the respect the we think they want or deserve (straw man, but not really)? So much energy and vitriol wasted on something that should just be a no-brainer, when there are actually important issues to get upset and worked up about (false dilemma, but again, not really).

Seriously, calm down. I'm a (nearly) middle aged white dude and guess what, I won the fucking lotto and I know it. I don't want to "give up" this accident of birth luck I've had, but I wouldn't mind everyone else having my luck too. It's not a zero sum game.
Posted by Theo Clark at 8:36 pm

Big pharma shill defends more than 90% of drugs being contaminated

A recent study in Nature has found that 92% of 26 medicines tested were found to have some form of contamination and/or substitution, because they included toxic metals, non-listed substituted pharmaceuticals and stimulants, and a variety of DNA, none of which were listed on the product's label.

These researchers used highly sensitive DNA sequencing, toxicology and heavy metal testing to assess the composition of 26 widely available drugs (they were purchased in Adelaide and are available for sale in retailers and markets nationally). The Venn diagram below, taken from their study, shows that only two of the 26 drugs tested were clean. 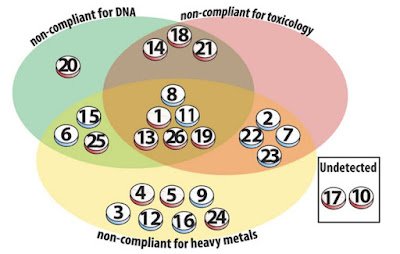 One results worth highlighting: some of the drugs also included ephedrine, which gives many people a buzz, making them feel good immediately (ergo, the medicine feels great and they should keep taking it). Also worth noting that nearly all were non-compliant for heavy metals and other dangerous substances, including more than the safe limit of arsenic, cadmium, lead and strychnine.

This is appalling. Big pharma is a multi-billion-dollar industry and this lack of quality control is inexcusable. What is just as shocking and inexcusable as the results, is the reaction from National President of the Federation of Pharmacists of Australia, Professor Linda Child. She does not believe such findings would be widespread across the industry, saying: "It will be one or two individual companies. It may be one or two cases [that have] happened, but not many. The current regulatory regime is perfect."

Ah, what? 24 out of 26 would suggest it's the norm and the opposite of perfect. For her to say this, instead of being outraged, shows she is simply the chief big pharma shill, bought and paid for by the multi-billion dollar pharmaceutical industry. This is an industry that clearly puts profits before patients. What anyone who cares about patients getting the actual ingredients of the prescribed medicines would say (I'd have thought) is that this needs to be properly investigated and someone needs to go to jail.

This is a multi-billion dollar industry. If they chose they could ensure rigorous quality control of ingredients at a minimum. And I'll go further — they should undertake proper, rigorous and open trials that test for the efficacy and safety of medicines. Not the dodgy process they currently go through, with sympathetic proponents rubber stamping every new drug any company wants and protecting them from real regulation and testing.