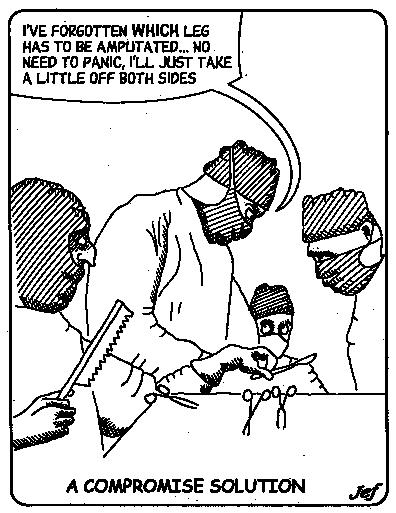 The advocate asserts that because they do not understand or accept the opponent’s views, in fairness the two should agree to "split the difference" and arrive at a middle position. Such an approach to addressing an issue is more about mollifying the parties to a disagreement, rather than arriving at the truth of the matter.

Jason Typeface and Wolfgang Von Volkswagen are senior bureaucrats in the Department of Justice. They have been engaged in a protracted discussion on the wording of a sentence in their jointly authored report on police "stop, question and search" powers. Jason has come to believe that police effectiveness in drug law enforcement is dependent on an absolute power to stop, question and search at their own discretion. Wolfgang believes that any questioning or search of suspects should only take place in the presence of legal representatives. They agree to split the difference and the final sentence reads: "Police may stop and search suspects at their own discretion, but any evidence so obtained cannot be used to prosecute the suspect.”

It is a safe assumption that neither Wolfgang nor Jason is satisfied with the compromise wording of the sentence. Neither of them actually believes that the stop, question and search policy they have come up with is the best one. Yet the reader of their report might make the assumption that the view expressed is what the authors believe to be the best policy. To avoid this misperception, Wolfgang and Jason should make it clear in the wording of their report that their conclusion is a compromise rather than a consensus view of the best position. Their compromise then would be open, rather than concealed.

There is a more intellectually respectable alternative to an open compromise. Wolfgang and Jason could be quite explicit about their disagreement and make it clear that they came to different conclusions as a result of their study. They could indicate that they have ”agreed to disagree” and they could state their separate conclusions. This would then leave it up to the decision-makers who read the report to decide on a final policy. This alternative would be the one favoured by the seeker after truth.

If they adopted this approach, both Jason and Wolfgang would preserve their integrity and they would be free to argue vigorously for their own favoured position. This approach is common in public documents such as reports of parliamentary enquiries, where a ”minority report” is commonly included when consensus cannot be reached.

Part of the problem with this issue is the emotional loading associated with the term compromise. In almost all contexts where the word is used, it carries either a positive or negative connotation. In the context of peace talks, industrial negotiations and the like, to compromise is to put aside ”selfish” considerations in the interests of a "fair" outcome. In the context of principled decision-making, a person who compromises is often seen as morally deficient.

Seekers after truth are always prepared to entertain the possibility of a compromise, but in doing so, they will be candid about differences, while putting differences aside in the interests of fostering a pragmatic and workable outcome.