Onus of proof; appeal to ignorance; (c.f. burden of solution). 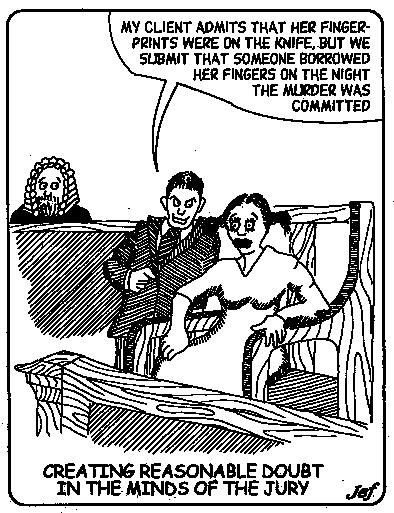 Peter Fantickler is studying biology at university. His lecturer has just outlined the curriculum for the semester. It includes evolution. Peter raises his hand and asks:


Why isn't Intelligent Design on the curriculum? You are going to teach us that all life evolved from one thing to another. But there are forms of life and components of living things that are too complex to have evolved, which biologists can't explain. It must mean they were designed by an intelligence.

Intelligent Design (ID) claims that in the living world there are irreducibly complex objects that cannot be explained by evolution by natural (and sexual) selection. Given this, they argue, and given these structures are complex and clearly have a purpose, they must have been designed by an intelligence. The CliffsNotes version - you cannot explain this phenomena, therefore my explanation wins (even if mine doesn't actually explain it either).

This is certainly not how one argues for a scientific hypothesis. For a theory to be considered plausible there needs to be evidence for it. It doesn't simply "win" if another theory is missing the occasional explanation (though all the things ID proponents claim evolution can't explain have been explained by evolutionary biologists in an orthodox fashion).

If for the sake of argument we grant ID proponents their first premise, that there are "irreducibly complex" living systems, we do not need to grant them their second. If there is an irreducibly complex living system whose evolutionary history cannot be explained, it does not automatically follow that it was intelligently designed. All that can be said is: "We don't know." In the example above, Peter is being fallacious when he appeals to the (supposed) ignorance of biologists as positive evidence for Intelligent Design.

The burden of proof falls on proponents of ID to make their case. They, of course, do not propose how these structures were designed, put together and built. Their explanation is not an explanation. It explains precisely nothing.

Two more examples:
The above invoke the appeal to ignorance. In both cases the lack of proof for the initial claim is taken as evidence for the contrary claim and as such are fallacious. When any proposition (e.g. aliens visit the Earth to observe us; indigenous people are more spiritual; problems in this life are due to events in past lives; dreams are a form of astral travel) can't be disproved, it doesn't mean that the proposition is therefore proved. A claim needs to provide positive evidence of its own. A lack of evidence for a contradictory claim helps, but it is not positive evidence.

It is perfectly appropriate for each of two parties to a dispute to ask for compelling evidence from the other person to support his or her case. This is skepticism in action. The problem only arises when the advocate takes the position that his or her own case is necessarily made if the opponent's case cannot be made.
Posted by Theo Clark at 10:01 pm