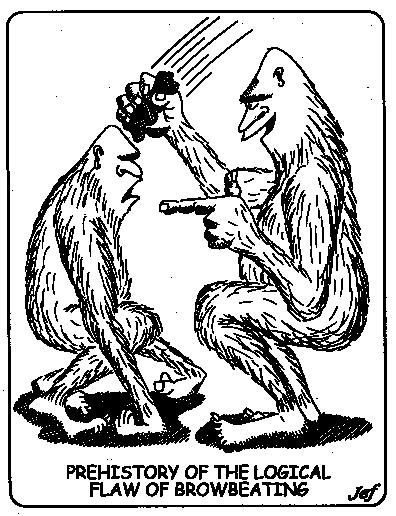 This fallacy usually occurs in face-to-face discussion. A discussion in which this fallacy occurs is likely to be heated and aggressive in tone. The advocate is loud, threatening and voluble. He or she does not allow the opponent an opportunity to make his or her case. When the opponent seeks to make a point, he or she is cut off abruptly and not allowed to finish. The speech rate of the browbeating advocate is rapid with minimal pauses. The fallacy of browbeating can also occur in print, but the histrionics characteristic of browbeating are limited by the mode of communication. Browbeating expressed in print or writing is better described as polemics.

Gertrude Grimace is an ageing cultural icon and professional expatriate. She is also a needy exhibitionist who seeks every opportunity to hold forth on any subject. A compliant and fawning media can always be relied upon to afford her plenty of opportunities to pontificate during any of her fleeting visits to the country of her birth.

On this occasion she is taking part in a panel discussion on youth. She calls for the voting age to be lowered to twelve. Another member of the panel begins his response: "But don't you think voters need a certain level of maturity to exercise a responsible vote, after all..." This is as far as he gets. From this point on Gertrude overtalks him, all the other panellists and the moderator. She is loud, obnoxious, strident and rapid-fire in her delivery.

Most interactions would be improved if participants engaged in more attentive listening. After all, everyone is entitled to express his or her own point of view. But this minimal entitlement is not enough - when a point of view is expressed, the person expressing the idea is entitled to a genuine hearing. This is common courtesy. It is also an essential requirement for the amicable resolution of conflict.

When confronted with browbeating, the detached doubter will make a firm claim for the right to be heard. If this claim proves fruitless and the pontificating browbeater continues to be intransigent, the opponent should terminate the interaction and explain why this proved to be necessary. Attempting to match the browbeater is almost always the wrong approach, especially when a discussion or debate is happening in front of an audience. Even a hostile audience can be trusted to see what is going on.

In the example given, the moderator of the hijacked discussion could turn off Gertrude's microphone after a minute or two of her tirade and calmly point out that he will not accept such hostility in response to honest opinions freely expressed by other members of the panel. Gertrude's pattern of behaviour suggests that she is suffering from LAME disease (Look At Me Everybody). Like most browbeaters, she has an overwhelming need to "win" an argument through physical suppression of her opponents' arguments. To the superficial observer, she may come across as confident and self-assured, but her browbeating suggests that she has very little faith in the soundness of her position. The skeptical observer will draw the obvious conclusion - Gertrude is all hot air, and her browbeating is a substitute for intelligent analysis and truth seeking.

Politicians are often characterized as evasive by the browbeating commentariat (political journalists and commentators). This is ironic. Politicians are circumspect and guarded in their speech because the commentariat is forever on the lookout for the unguarded moment. They seize upon and distort trivial lapses. They quote out of context, "beat up" and manufacture stories. The ego and career considerations of the commentariat often outweigh any commitment to conveying valid information to an informed electorate.
Posted by Theo Clark at 12:39 pm