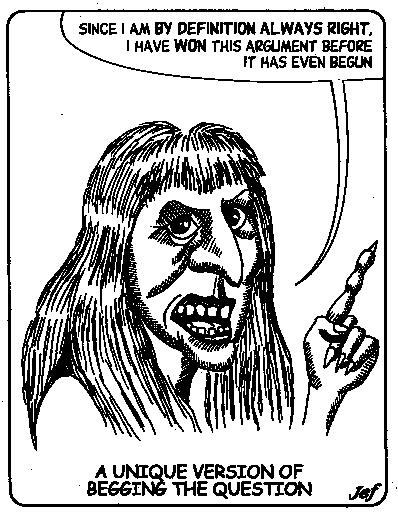 The advocate uses the conclusion, or rather the point he or she is attempting to make, as the premise for his or her argument. The circularity of the claim is usually disguised, as the premise and the conclusion are stated in different ways (one is a paraphrase of the other). When advocates "beg the question", they fail to seek external support for their claims. The point under discussion is assumed, rather than demonstrated to be true.

"I don't think that is a healthy way of living," responds Russell. "It's good for men to gain a better balance of their masculine and feminine selves."

The fallacy of begging the question assumes as "evidence" for the argument the claim or point that is in question. Dotty's argument, when dissected, is a clear example of begging the question. She has assumed without any external evidence that her claim (free trade is good) – is correct. She attempts to justify this claim by restating this in a different form.

First she says: "...the unrestricted flow of goods between countries..." This is a long-winded reiteration of "free trade". Free trade is the unrestricted flow of goods between countries. She then follows up with the claim that this "...will result in great benefits to this country and to the whole world." This is merely a paraphrase of her original claim that "...free trade is good for everyone."

In the second example, the same kind of specious reasoning is used. Stripped of its rhetoric, Russell believes that "men need to get in touch with their feminine side" because it is good for them. He gives no actual evidence for this claim; he merely asserts an opinion.

Begging the question is an easily identified fallacy once an argument has been dissected. The conclusion and the premise are identical in all but their expression. Reasonably adroit proponents are able to disguise this reiteration well. But this deception is readily exposed when the skeptic points out that the advocate is simply restating the premise as the conclusion.

It should be noted that the expression "begging the question" is routinely misused by journalists. When a journalist, or interviewee or commentator says (for example) that: "This begs the question that..." they often actually mean "This raises the question...". This corrupted usage should be resisted - unless the original meaning of useful words and phrases is preserved, we lose precision in language. Lack of precision in language is often symptomatic of a parallel lack of precision in thinking. Without being too pedantic, when the phrase "begging the question" is used incorrectly in our presence, it is worthwhile pointing this out. At the same time, it might be useful to point out that careless word usage often signifies careless reasoning.
Posted by Theo Clark at 8:30 am