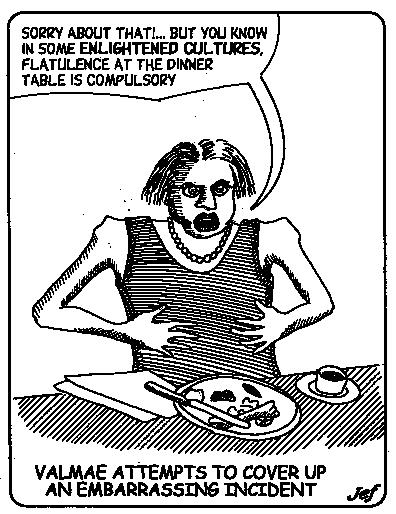 The advocate denigrates a particular action an organisation, a government, or an opponent wishes to take to address an acknowledged problem. At the same time, the advocate doesn't attempt to provide any alternative solution. He or she tends to characterize any deficiencies or limitations in the opponent's proposed solution as morally reprehensible or fatally flawed.

It is morning tea in the Faculty of Applied Sociology at the University of Wooloomooloo. Dr Roni Tunnell, a lecturer in holistic cultural autoeroticism is railing against a request from the Faculty Board. The board has asked him to "show cause" why his elective on Gendered Psychic Self-Pleasuring should not be cancelled. The board has pointed out that his average enrolment of three students over the last six semesters is not really viable in times of financial stringency. "It's not my job to justify my course, or to find ways of increasing enrolments, or to find external sources of funding, that's their job... that's what those stupid lazy bastards are paid for."

While we can understand the vehemence of Roni's response to a possible threat to his sinecure, he is not doing himself any favours with his intransigence. The board has put forward the obvious solution to this type of financial crisis – cancel non-viable electives to increase efficiencies in staffing. Roni is refusing even "part-ownership" of the problem. He is rejecting the board's solution. At the same time he is refusing to provide any viable suggestions of his own. He is avoiding the burden of solution by attempting to place the responsibility for finding a solution on the board. Further, any solution coming from the board must meet with his approval.

The burden of solution fallacy is commonly encountered in contributions to public debate on sensitive and difficult issues. Individuals who are fond of displaying ethical sensibilities in public forums are sometimes so self-indulgent that they condemn possible solutions of others and yet offer none of their own. They perceive mere opposition as a "principled stance". They presume to tell others what not to do; but offer no solutions of their own, or they offer "solutions" which are mere wishful thinking.

If (for example) an advocate doesn't agree with economic sanctions to enforce compliance with human rights in a dictatorship, then he or she should offer a better alternative and argue its merits. If he or she is unable or unwilling to do so, then the case must be made that "leaving things as they are" is better than attempting the economic sanctions solution.

If the advocate does attempt to make the claim that the status quo is better than the proposed intervention, the skeptical opponent should be alert to the possibility of wishful thinking (see argument to consequences). The advocate may claim for example that "left to themselves" dictatorships will evolve into pluralist democracies without the application of significant external pressures or interventions – that terror and oppression will eventually fade away in the police state if the leaders of liberal democratic nations engage with, and sweet-talk the dictator. This argument is easily countered by opponents. They can simply ask for examples of dictatorships which have become liberal democracies over a reasonable time-frame without the application of external pressures.

In burdening the opponent with the solution, self-indulgent advocates are mere naysayers, and their opinions have little merit. Further discussion is likely to be fruitless.

It is important to note that one can legitimately criticise a proposed solution without offering one in response. It is not unreasonable for a seeker after truth to admit that they do not themselves have a solution for the problem. In doing so one is avoids engaging in pretense or making light of the complexity of the issue. The burden of solution fallacy requires the sanctimonious criticism of the actions of others, along with an express statement (or an implication) that the critic knows what the solution is.
Posted by Theo Clark at 3:28 pm