Post hoc ergo propter hoc (after this, therefore because of this); false association; superstitious belief. 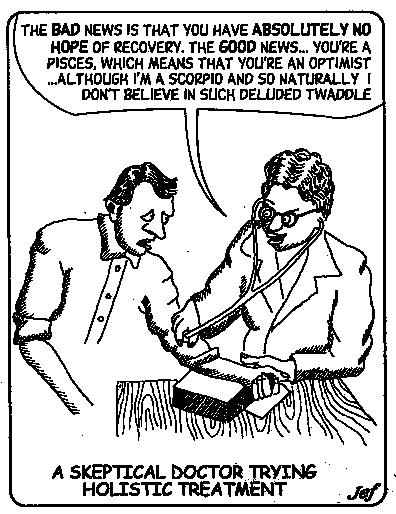 This fallacy is the result of the common human tendency to associate events which occur in sequence and to assume that there is a causal link. When an advocate claims that there is a causal relationship between two events, they need to give a plausible reason beyond simple association. If the advocate cannot do this they are probably in error. There are two possible "levels" of false association:

In the first example Trixie and Bevan assume there is a causal link between Feng Shui and economic prosperity. However, if Beijing is undergoing economic growth and its citizens happen to practice Feng Shui, it does not follow that Feng Shui is the cause of the economic growth. This relationship may simply be apparent rather than real – that is, a coincidence. To establish whether or not Feng Shui can influence economic prosperity, systematic tests would need to be conducted.

In fact at any one time, a great many cities around the world are going through economic growth. Few, if any city administrators give any consideration to Feng Shui. There are no doubt a great many other cites in China where Feng Shui is practiced. What is their economic activity like? The seeker after truth should always ask questions which go beyond mere association, and look for alternative possibilities.

In the second example, Aaron claims low self-esteem causes obesity. However on the evidence presented, causation could be in the opposite direction – obesity could be the cause of low self-esteem. Or both could be caused by a third, unidentified variable. To a skeptical scientist, such a strong correlation between obesity and low self-esteem is potentially of great interest, but a series of sophisticated follow-up studies would be needed to determine the nature of the correlation and the direction of causation.

False cause can have very serious consequences. For example, the false cause fallacy during the European dark ages led to the widespread belief that illness, famine and personal misfortune was caused by black magic and sorcery. Such beliefs led to "witch-hunts" (literally) and unfounded but widely believed accusations of sorcery. The absence of skepticism in communities wallowing in superstition led to the burning to death of innocents falsely accused of witchcraft. This still happens in the present day in societies that lack good governance and are dominated by superstition.

The false cause fallacy varies in the magnitude of the problems it causes. From the simple and harmless superstitions of sports people undertaking rituals or wearing a "lucky charm" in order to perform well, to the harm caused to seriously ill people when diverted from effective treatments to ineffective or harmful treatments by quacks or frauds.