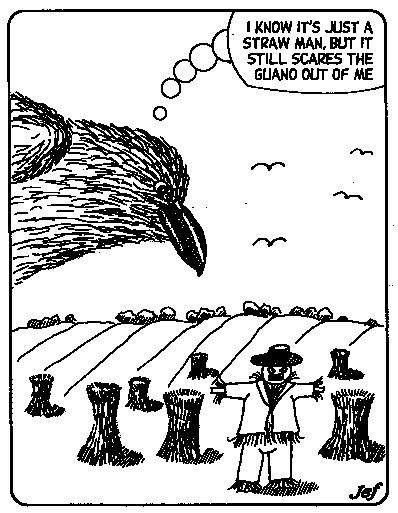 The advocate attacks a weakened, exaggerated, over-simplified or otherwise false or distorted form of the opponent's argument rather than the real one. Commonly, the devious advocate presents a simplified caricature of his or her opponent's argument, then demolishes this "straw man", which is nothing more than an invention of the advocate.

Harry Cackleberry has just taken the floor during a public debate on the teaching of evolution in schools. "These evolutionists would have us believe that our great-great-great grandparents were nothing more than monkeys. They say that one day, hundreds of thousands of years ago, a monkey gave birth to a human. Now I ask you ladies and gentlemen, how can a monkey give birth to a human?"

Jim Flakehammer, an evolutionary biologist from a research institute challenges Harry from the floor and says: "You are giving a false account of the evolutionary explanation of human origins. The way you put it, evolution is an easy target to be knocked down – the idea of a monkey giving birth to a human is quite ludicrous. However the real account given by evolutionary theorists is far harder to dismiss. What science actually says is that humans, monkeys and apes are related through a common ancestor from which all have evolved gradually by a process of natural selection."

Harry may genuinely believe that his simplistic version of evolution is the one held by evolutionary scientists. In which case he is committing the straw man error in ignorance. However it is often the case that the straw man error is a deliberate rhetorical device used by a dishonest advocate to "wrong-foot" an opponent.

For the purposes of analysis, we will assume that in the present case, Harry is being deliberately disingenuous. He is fully aware of the actual claims of evolutionary scientists. However he is uncertain of the strengths of his argument against the real theory of evolution. He therefore conceals his knowledge and advances a hackneyed caricature of the theory of evolution in order to create an easy target for scornful comments. His motives are to win the argument on the day, rather than to genuinely explore the issue.

A genuine seeker after truth does not resort to the construction of a straw man. If an opponent's argument is actually weak or incorrect, then there is no need for the advocate to misrepresent it in order to win. In the present example, Jim (the opponent) responds to Harry's subterfuge by pointing it out. Even if others in the room are unable to fully understand the actual account of human evolution given by science, they should at least be alerted to the fact that Harry (the advocate) is painting a false picture.

Note that the term "straw man" is at times used to mean something quite different to false positioning. This can sometimes lead to confusion. The alternate meaning is roughly equivalent to "bogeyman". That is, a scary apparition which is apparent rather than real – some imagined problem or consequence of an action which is conjured up by a party in a dispute to stop a proposed action. This usage is similar to the expression "paper tiger". The implication is that although a consequence of an action looks fierce (or difficult), in reality it is nothing to be concerned about.
Posted by Theo Clark at 5:09 pm