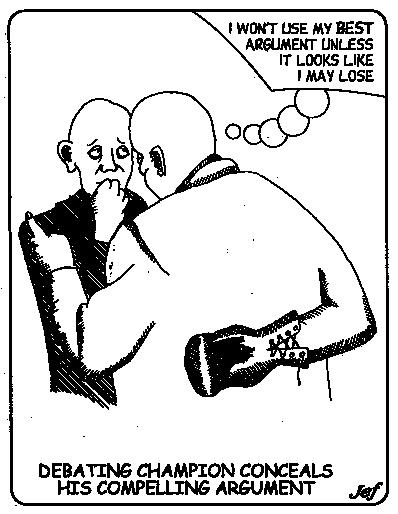 The advocate deliberately conceals or avoids counter arguments to his or her own position in order to defeat the opponent. In such circumstances, the motive of the deck stacking advocate is to win the argument at all costs. He or she is not interested in arriving at a solution to a problem or the truth of the matter under discussion. Even when the deck stacker is aware of compelling information which would be of significant assistance to the opponent, his or her attitude is that it is up to the opponent to make the opposing case.

Homner Stimson is arguing with his neighbour Nod Flinders about gun control. "People should be allowed to protect themselves. What if someone breaking into my house has a weapon? With a gun I'll be able to keep my family secure."

Nod replies: "I just think it would be too diddly-dangerous. If everyone had a gun there would be more and more shootings."

Homner changes tactics and attempts to shift the focus of the conversation: "Well we could say the same about swimming pools. About 500 children a year drown in the US, whereas under 200 are killed by guns. And, there are far less pools than guns. Why aren't you calling for swimming pools to be banned?"

In this example, Nod points out a potential problem with Homner's initial argument. With more people owning guns, it seems likely that there would be more shootings. Homner thinks about this and sees that Nod may have a point. His tactic is to move the goalposts and make an analogy with swimming pools. He then stacks the deck by only referring to data related to children.

The total number of (non-suicidal) gun related deaths in the US is over 12000 a year. Homner knows full well that Nod's argument applies to gun control in all areas of society, not just where children might have access to guns. He deliberately limits the discussion to an area where he feels his argument has a chance. He "stacks the deck" in his favour.

In the present example, and if Nod were a reasonable person, he would find many weak points in Homner's position, despite the deck stacking. However it is also important to address the deck stacking per se. The seeker after truth in such a situation would make explicit reference to stacking the deck and would repudiate the use of such a tactic whenever it is used in argument.

False balance is a related concept to stacking the deck. It is an accepted truism that there are "two sides to every story". As a consequence, TV reports often feel the need to find an individual who holds the opposite view of the main topic of the report. They do this in the name of "balance". In many cases this is legitimate and fair minded. However, in a report on (say) childhood immunisation rates, the cranks are often given equal or even more time than is representative of their view, thus providing the report a false balance. It gives the appearance of a real controversy where there is none. Giving the actual balanced view would result in the expert being given (say) two minutes of screen time, and the anti-vaxer a one second clip of an outtake in which they didn't realize they were being recorded and are scratching themselves somewhere inappropriate.

It should be noted that the term stacking the deck is sometimes misapplied to situations where the composition of a discussion panel is biased in favour of one side of a controversial issue. Producers and presenters of radio and television discussion programs rarely take the trouble to ensure that panel members or interviewees are numerically equal, or equal in terms of their ability to present a cogent argument. While the expression "stacking the deck" seems like an appropriate description for such practices, its use might lead to confusion with the standard usage. A better expression might be "stacking the panel" or "panel selection bias".

We regard "stacking the panel" as a reprehensible and pernicious practice which leads to ungovernable bias in television and radio current affairs journalism. In our view, the only corrective to this bias would be to give us our own program and to let us have a free hand in choosing the on-air talent.