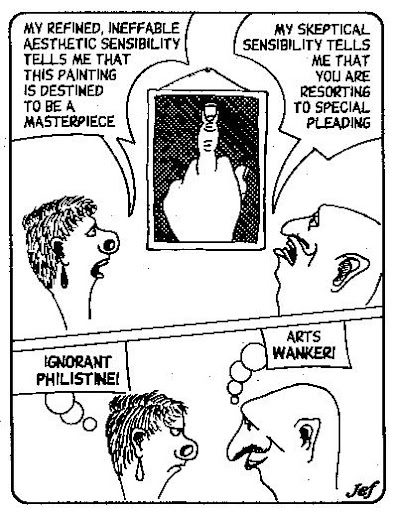 
This fallacy occurs when an advocate claims that he or she has a special insight into the topic under discussion. Further, (by implication or explicit claim) the opponent cannot possibly comprehend the subtleties or complexities of the issue because he or she is unable to attain the level of insight available to the advocate. Underlying such special pleading or claims to deep insight or empathy is a presumption that the views of the advocate cannot be evaluated because the opponent lacks the capacity to make any valid judgement. All such claims should be treated with deep skepticism.

Another variant of the fallacy Special Pleading occurs when an advocate, faced with contradictory evidence, introduces caveats, double standards and exceptions to the rule, in order to maintain (and redefine) their position. See Immunised Hypothesis for a detailed explanation.


Toby Nightlight is writing a letter to the local newspaper. He is incensed at a column in the paper written by a local medical practitioner, Dr Sally Sodfreud. The basic theme of Sally's article is that violence associated with alcohol abuse in the local indigenous community has increased enormously over the last year. She attributes this to the construction of a "wet canteen" at the community centre just over a year ago.

Toby's first sentence reads as follows: "As an aboriginal man, I know what damage has been done by paternalism towards aborigines in the past. Dr Sodfreud might be well meaning, but she doesn't have a clue... [if she were to] walk a mile in my shoes, she would understand just how insulting her suggestion is."


In the example given, the wording of Toby's opening sentence appears to be attempting to establish from the outset that his views on the issue of alcohol use are unchallengeable. Seekers after truth would place little weight on such a claim per se. They would examine the rest of the letter and consider any of Toby's claimed insights on their own merits. Reasoned justification of views would be needed before they could be considered to be credible. After all, Sally could herself claim special insights not available to Toby. As a local GP she would no doubt be attending to injuries inflicted by alcohol-fuelled violence and she would be talking to the victims.

Special pleading is a commonplace feature of newspaper opinion columns, political speeches, television panel discussions and the like. People who seek to air their convictions in such public forums are usually attempting to influence public policy. Often there is also an attempt at self-aggrandizement through moral and intellectual posturing. In such circumstances, and when the "public advocates" fail to mount a well-researched, intelligent argument in favour of their convictions, they often fall back on a range of shallow rhetorical devices, including special pleading.

Statements along the following lines are examples of special pleading: "You don't understand because you are: a man, a woman, an aborigine, a whitefella; or you are ignorant, a philistine, insensitive, lack cultural awareness or intellectual ability, spirituality etc. If you were like me or had my fine sensibilities you could not help but agree with me."

Special pleading can take many forms and can be employed in a wide variety of contexts. If for example, the judge at an art show is unable to convincingly explain her choice of a prize-winner, she may fall back on transparent and self-serving special pleading by way of justification. We here quote verbatim some examples of the genre from an actual judge at an exhibition (attended by Jef). The judge is commenting on the first prize-winner: "It speaks to me... it is perhaps... I sense that the artist is challenging and inviting self-examination... the viewer needs to be attuned to minimalism... only seems like a four-year old could do it... that is perhaps a figure.... perhaps looking down... perhaps in torment." Perhaps the judge is an arts wanker?

A variant of special pleading is synonymous with immunised hypothesis. That is, the advocate makes a claim that in practice (or even in theory) cannot be falsified. When evidence is brought to their attention which contradicts their claim, they continue to add on ad hoc explanations; generally refusing to even entertain the idea that their original claim may actually be false.
Posted by Theo Clark at 9:00 am