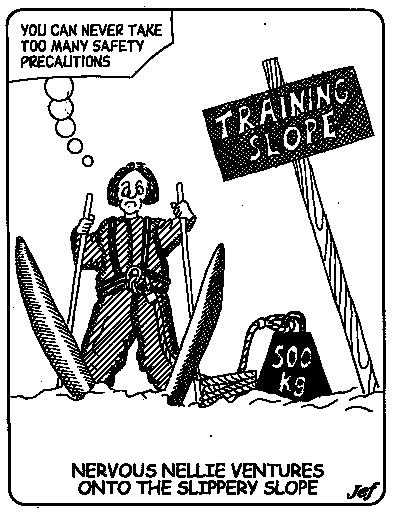 The slippery slope fallacy assumes without evidence that if we take a particular step which in itself doesn’t cause a problem, it is nevertheless the first in a series of steps that will lead inevitably to some undesired outcome. This fallacy in reasoning is often called the “thin end of the wedge” argument. An example might be the view that if marijuana is decriminalized, then this will inevitably lead to decriminalization of harder drugs. Or: “If we allow simulated depictions of sex on TV after 9.30pm, it won’t be long before such things are depicted early in the evening when young children are watching.”

While this view is technically flawed (not based on direct evidence), dismissing such concerns as necessarily without foundation would be problematic, as experience suggests that communities, nation-states or civilizations may sometimes be incapable of recognizing and responding in a timely way to incremental, adverse change.

Gene Toadstrangler is a spokesperson on public affairs for the Church of Chastisement. He has been asked by the editor of The Daily Drumbeat, a small regional newspaper, to write an article on a Bill before state Parliament on the Rights of the Child (Safety and Security). Among his remarks is the following statement:

At the moment, the proposed legislation states that parents are not allowed to assault their children with a heavy object… this is something we would all agree with. But the problem with such legislation is that it won’t stop there… once this is passed, it will give impetus to ‘do-gooders’ who will be encouraged to remove all rights to parents to discipline their children.

Gene is in the paradoxical position here of seeking to argue against a proposition that he actually believes in. He believes that parents should not be allowed to belabour children with a solid object, but he doesn’t want the legislation because legislation which might follow might go too far.

Gene would be well advised to clearly define for himself just what level of punishment should be available to parents in chastising children. He should then develop as clear a case as possible for reserving the right to punish at that level. Following this, he could then point out that although the current legislation is acceptable to him, there is a widely recognised tendency for “crossing lines drawn in the sand”. He could argue that the community as a whole should be alert to possible further shifts in the levels of correction available to parents. When such a shift occurs, he can then vigorously oppose that further shift from a credible standpoint.

The slippery slope is a widely recognised and documented fallacy in informal logic. However, it is often the case that accusations by an opponent that the advocate is employing the slippery slope fallacy are unwarranted.

Sometimes individuals who simply wish to halt an incremental change at a particular point will present a rational case for their position. For example, an advocate may argue against cloning as a solution for human infertility on the grounds that cloning is itself undesirable for various reasons. Further, that once the technology for safe and effective human cloning is developed, elective cloning is likely to follow. An accusation that the advocate has made unjustified use of the slippery slope argument in the latter proposition may not be warranted. If (for example) the advocate can illustrate and support his or her case with parallel examples where technological developments have outpaced ethical controls, then he or she is likely to be a seeker after truth rather than an emotionally driven alarmist.

On the other hand, when people who lack the mature judgement of the authors venture onto a slippery slope, they will inevitably wallow in ever-more bizarre misconceptions and fallacious reasoning until we end up with nothing but gibberish – and finally, the complete destruction of civilization as we know it.