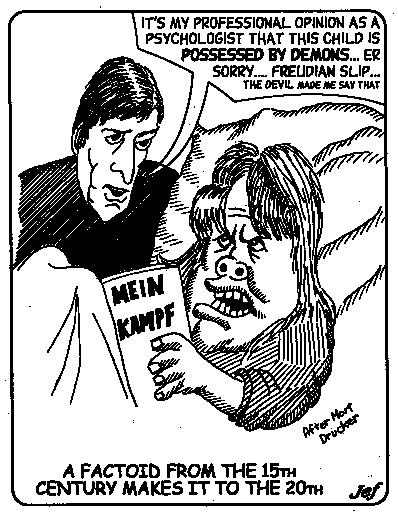 The advocate advances or states a mere proposition as though it is either: (a) an objectively established fact; or (b) so taken-for-granted by "reasonable people" that it is "beyond question". A key characteristic of a factoid is that it is so commonly assumed to be true, that it becomes "the Truth", when it is not actually established as true. The OED defines a "factoid" as: "Unreliable information which is repeated so often that it becomes accepted as fact."

Dorothy Compost and Sheree Coachbolt are sitting companionably over coffee at a cafe on a Sunday morning. Dorothy reads aloud from a newspaper article: "Teams of trauma counsellors are volunteering to leave immediately for the Antarctic to counsel survivors of yesterday's rabid penguin attack which resulted in the deaths of 12 patrons of a "See @Sea!" cruise. The government has not yet agreed to fund the necessary charter flight."

Sheree says in response: "I'm not surprised they won't fund the charter, wouldn't it be better to spend the money on re-uniting survivors with their families?"

Dorothy bridles and retorts: "That's so insensitive. Everyone knows that post-traumatic stress disorder will be much worse and much more prolonged if victims aren't counselled immediately after the event by trained professionals."

The assumption that victims should be encouraged to talk about their feelings after a distressing event is a clear example of a "runaway factoid". The practice and belief has become widespread and commonly accepted in the absence of compelling evidence. There is evidence both for and against the practice, but the preponderance of recent evidence suggests that for many individuals, post-trauma counselling may be exactly the wrong thing to do.

In the example given, Dorothy could point out to Sheree that the notion of re-living trauma through dwelling on the event and talking about it seems counter-intuitive. She might venture an opinion that the idea of "bringing out" repressed trauma is based on discredited psycho-analytic dogma rather than evidence. Dorothy could further point out that, unless someone is diagnosed with a specific anxiety disorder such as post-traumatic stress, mental health is more likely to be underpinned by resilience – the capacity to "bounce back" and move on from trauma, rather than dwelling on it. Dorothy's claim that "everyone knows" is the element of her claim that invites a direct challenge and enthusiastic debunking.

The skeptic with iconoclastic tendencies is particularly attracted to factoids. Myths masquerading as facts often assume iconic or even sacrosanct status, and debunking enshrined myths can be an exhilarating blood-sport. A highly entertaining activity in itself, whatever the topic or subject area. Some domains of activity or types of publications are a treasure-trove of factoids ripe for debunking. These can include: desperately oversold curriculum innovations or educational practices; best-selling books on health or wellbeing; books by crusading historians, anthropologists or cultural gurus; any book by or about a LAME (Look At Me Everybody) public figure, and of course, newspapers.