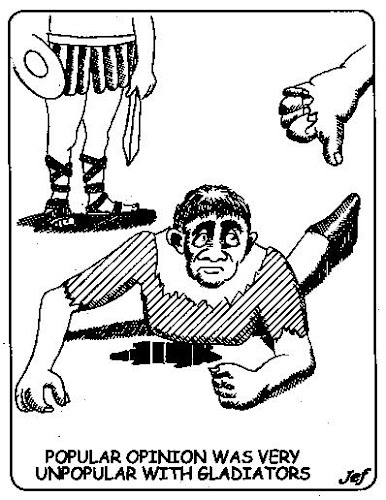 Alison Granules is a "concerned mother" taking part in a televised "Hypotheticals" debate on decriminalisation of Heroin use. She asserts: "People are not stupid. The great majority of voters will not stand for the provision of free heroin to users by government authorities. Everyone knows you can't cure addiction by supplying addicts with addictive drugs."

Dr Dennis Pontificatum (the spokesperson for the Society of Physicians on drug policy) interjects: "Yes, but the great majority of drug and alcohol experts would take the opposite view. Who are you going to believe?"

In the example above, both Alison and Dennis are attempting to validate their positions by claiming support from majority opinion. In Alison's case, she is asserting the value of general, non-specialist, "democratic" opinion in the general population. Perhaps underlying her case is the assumption that "commonsense" opinion is of more value than the views of "so called" experts.

Dennis is attempting to trump her appeal by citing the opinions of a group which he presumes has more credibility and insight than the general population. His underlying assumption is that the majority views of specialists are of more value than the "ignorant masses".

Either way, Appealing to Popular Opinion does not provide any evidence for that opinion other than, "Some other people believe what I'm saying is true". If that's the best evidence for a claim, then it's probably not much of a claim. When Appeals to Popular Opinion are made in arguing a point, the seeker after truth needs to be skeptical about majority views – whether those views are from the general population or a selected, expert group with "insider knowledge".

It is understandable to place greater weight on expert opinion on any topic. This heuristic will work more often than not, but if solely relied upon, may lead the seeker after truth very badly astray. In many fields of enquiry or policy-making for example, the experts are almost always entirely self-selected. That is, they choose to seek a career in (say) child protection, drug policy, defence studies or social welfare because of a pre-existing set of strongly held values. They may use their position of influence to ensure that their views prevail in the relevant areas of social policy.

We should have a systematic bias to favour the opinion of experts over non-experts. We should also take this into account and attempt to independently verify the expert opinion where possible. At the very least we should expect experts to explain why they hold their position, rather than allowing them to assert it, relying on our deference to yield them their point. Seekers after truth will not meekly accept the validity of an expert opinion. They will demand evidence and a rational justification.

Did you know that the supplement industry is now worth over $50 bn world wide annually? This just goes to show the importance of having a daily multivitamin.