Guilt by association; "they're all tarred with the same brush." 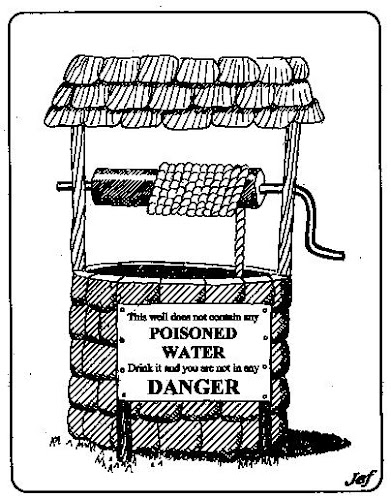 The advocate attempts to undermine or throw doubt on the opponent's position by linking the opponent's argument to a group which is seen as suspect, a source which is denigrated by the advocate, or an idea that is unfavourably viewed. Thus the metaphor of poisoning the well. Any "water" (idea) taken from that "well" (source) is poisonous (tainted, of no value).

Stan Webserver (the advocate) is engaged in a dispute with Sally Cubbyhouse during a seminar on unemployment. Sally cites some figures published by the Catholic Welfare Agency which suggest that 10% of families resident in urban areas are living below the poverty line.

Stan says: "I wouldn't even consider any figures put out by them, they all have an axe to grind and just want to undermine the policies of the government."

It may actually be true, or partially true that an advocacy group such as the Catholic Welfare Agency is prone to selective publication of results, using biased research methods, and concealing information that doesn't support their case. It may also be true that their research is impeccable, objective and extremely valuable.The seeker after truth is not naive, and therefore should be skeptical about research results. But seekers after truth are not cynical.

Stan's fallacy is in the act of dismissing the results out of hand (á priori). In doing so he refuses to give careful consideration to Sally's point. Stan's intransigence obstructs the discussion, and probably creates an implacable opponent out of Sally. Further discussion between them will be fruitless. Stan's response should have been to question Sally about the provenance of the article, and to seek further information. If the time was available to him, he could then read the article for himself and draw his own conclusions.

Advocates who habitually Poison the Well by denying á priori that information from particular sources can have any value, or by linking unrelated ideas or facts in order to disparage an opponent's position, may see themselves as skeptics. For example, a common bonding ritual in non-US Western culture, and within a particular social class, is "bagging the Americans". This is a social activity where like-minded people discussing geopolitics share variants of the sentiment "Americans can't be trusted", or "Americans are ignorant fools".

In sharing these sentiments they (by implication) congratulate each other and see themselves as skeptical, principled and capable of deep insights into global political issues. However, it could be argued that such sentiments are shallow rather than profound, and that persons expressing such sentiments are selectively cynical rather than skeptical. A seeker after truth can always come up with a skeptical response to a fatuous generalisation intended to Poison the Well.

For example, an analytical line of probing questions could be directed at the advocate who claims "Americans can't be trusted". Each question would move the advocate out of his or her comfort zone. "What do you mean by 'Americans'? All Americans? All of the time? Aren't Americans pretty diverse… like, say, Australians, Canadians, the English?"

When smug and ignorant advocates assert that they "always disbelieve" a particular source of information – e.g. the Americans, the police, a particular political party, the government, the unions, the environmental lobby, the mining companies, the military – more often than not, they fondly imagine that they are enlightened, principled and skeptical. When an advocate associates their opponent's position to a disliked group, idea, or source, they perhaps think they have made some clever insight that others are incapable of making. Perhaps they have. But when it is their modus operandi, when they routinely make such unsubstantiated links, they are declaring their knee-jerk cynicism and simple-minded world view.

Ignore the well-poisoners and seek out the company of open-minded persons. Persons more like your good self.

A climate change contrarian makes the point that environmentalists have made many failed catastrophist predictions before, such as The Club of Rome on resources, Paul Erlich on population, and even the Y2K computer bug.

An anti-evolutionist states that Hitler was a Social Darwinist, and as such Darwin's book On the Origin of Species can't be believed.