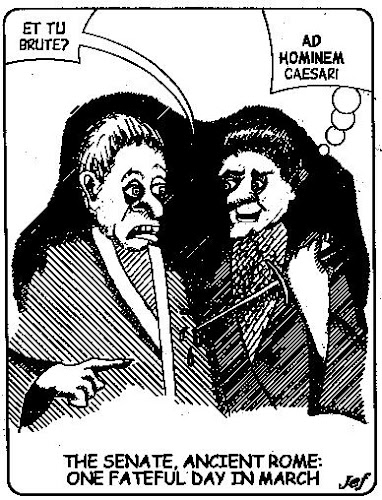 The advocate attacks his or her opponent rather than the argument put forward by the opponent. When an Ad Hominem attack is used, the content of the attack does not relate to objective facts about such things as the opponent's membership of a particular group, or the profession they practise (e.g. environmentalist, lawyer). Rather, the abuse is directed at the person's character or other personal attributes.

Phil Schnotter and Nigel Pennyweight are having a heated conversation in the pub about banks when Phil (the advocate) says: "I know why you think bank profits are too high Nigel... you're just prejudiced against banks because you're a penniless loser. If I were such a loser I would be prejudiced against banks too… You just hate hardworking, successful people who happen to have enough money to invest."

At times this fallacy may be hard to distinguish from other common fallacies such as Impugning Motives and Poisoning the Well. In fact, all three fallacies may be closely associated with each other and may even occur in the one sentence. The key characteristic of an Ad Hominem attack is that an abusive label is directed at the individual and used as a gratuitous insult (that is, an insult which really has no bearing on the subject under discussion).

In the example given above, the use of the word "loser" is the key indicator that an Ad Hominem attack is taking place. The label is simply a term of abuse, and Phil clearly intends to hurt and belittle Nigel by calling him a "loser". Use of such terms is likely to raise the emotional temperature of the discussion and result in an unproductive trading of insults. (Note that immediately after the personal abuse in the example above, Phil then impugns Nigel's motives in the words that follow the personal abuse. He says: "… You just hate hardworking, successful people...")

Another point to consider is whether the personal abuse is, strictly speaking, a fallacy; is there a link between the personal attack and the claim? In the example above, Phil clearly links his abuse of Nigel, calling him a penniless loser, to his hatred of banks, by using the conjunction "because". As such, Phil is fallacious.

If Phil had stated: "You are wrong about bank profits. It's important for banks to maintain a healthy cash reserve to be protected against economic slow downs and recession. And, also, you are a penniless loser." he would still be engaging in personal abuse, but would not fallacious. In this version, the abuse is merely an entertaining adjunct to the argument.

A form of personal abuse which is particularly common today is the unjustified use of a negative label associated with the topic under consideration. For example, a witless advocate might label a proponent of zero population growth a "racist" without justification. In doing this, he or she is actually seeking to undermine the proponent's credibility in order to evade discussion of the issue, rather than engaging in considered debate. It is commonly the case that for each term of abuse that may be directed at a person advocating one side of an argument, there is a term of abuse which may be directed at the other side. For every "greenie", there is a "redneck", for every "misogynist" there is a "feminazi", for every "fascist" there is a "stalinist", for every "homophobe" there is a "queer".

Arguably the most vile form of Ad Hominem is Reductio Ad Hitlerum. This variant, given its name, should be fairly obvious to spot. Comparing the disliked leader of a political party to Hitler is a seemingly popular fallacy that people who hold extreme political views like to make on occasions. Comparing any modern western democratically elected leader to Hitler should be self evidently absurd to the impartial observer. Any advocate of a point of view should avoid labelling an opponent with emotionally laden, abusive and grossly simplistic terms. Labelling invites retaliation, and the intellectual level of the debate plummets beyond any hope of recovery.

The authors of this book are particularly averse to puerile name-calling and gratuitous slander directed at individuals during any disagreement. It is our considered view that anyone who deliberately uses personal abuse in an attempt to win an argument is engaging in unconscionable conduct. No matter what the circumstances, any person who resorts to Ad Hominem only does so because they are a stupid bastard of the first order.