Most skeptics familiar with the Huffington Post would be well aware of its poor track record when it comes to logic and critical thinking. This is usually the case in any of the posts they write about science or health. But this time it has crept into something that is normally immune to sloppy thinking - pop culture! (It's immune because pop-culture is devoid of anything requiring critical thinking...)

They asked an important question regarding Lady Gaga's recent appearance at some award show, where she wore a dress made out of raw meat. "Lady Gaga's meat dress - offensive or awesome?" Ugh, what's offensive is the obvious False Dichotomy.

Lady Gaga's meat dress could be offensive but not awesome, awesome but not offensive, or both offensive and awesome (or neither). And this presumes, without any basis, these are the only two options. What about LAME? 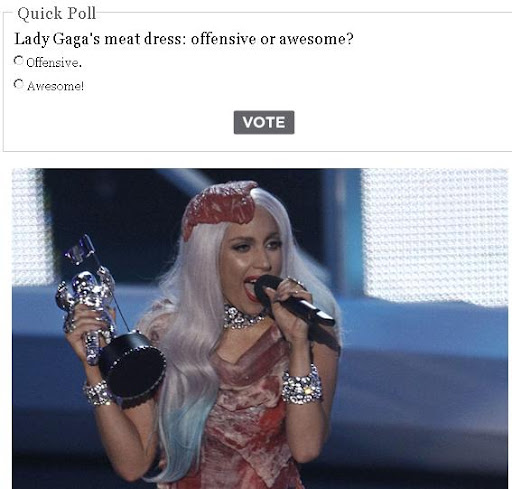