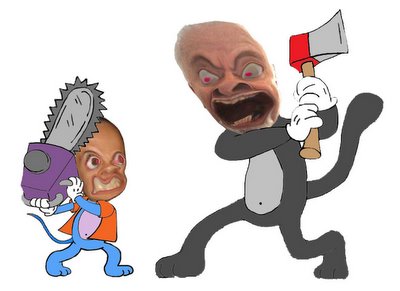 A commenter, at The Daily Dish, on the Danish cartoons of Mohammed and the subsequent overreaction by some Muslims about the place, provides an example of a False Dichotomy and/or Dilemma (it was a bit of a dilemma as to which label to use):

"I'm honestly starting to suspect that, before this is over, European nations are going to have exactly four choices in dealing with their entire Moslem populations -- for elementary safety's sake:
(1) Capitulate totally to them and become a Moslem continent.
(2) Intern all of them.
(3) Deport all of them
(4) Throw all of them into the sea.

(Actually, I suppose it's a False "Tetrachotomy", though choices 2, 3 and 4 are essentially the same). I suspect this comment intended to be somewhat tongue in cheek. Even so I sincerely hope that the solution does not lie with the choices listed above… (Then again, given the seeming impossibility of reasoning with people like this, this, and this, maybe he's right? As I can't suggest any alternative strategies myself, I'll just have to live with the shame of committing the Burden of Solution fallacy.)

Update: Prof Juan Cole recognises the complexity of the antecedents to the Cartoon violence, uses them to excuse the mobs, yet still can't help himself - it's Bush's fault.

Update II: Of course, there is plenty of hope with Muslims such as Irfan Yusuf. He doesn't feel the need to make excuses.
Posted by Theo Clark at 11:58 pm