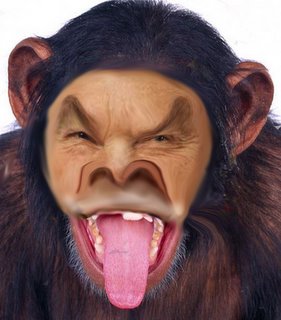 A leaked report on research commissioned by the Australian Academy of Social Sciences caused consternation at the Academy today.

The research was intended to demonstrate that academics in the social sciences and humanities are less chimp-like than the general population.

Our informant tells us that the board of the academy believed that the superiority of academics over the common herd could be demonstrated empirically. Once demonstrated, "the ignorant masses" would be less likely to greet absurd public pronouncements on social issues by academics with howls of derisory laughter.

Unfortunately for the Academy, the research demonstrated that while the general population had 96% of their genes in common with chimpanzees, social scientists had 97.8%.

Professor Bonzo, the Chairman of the academy (pictured above, left) was asked to comment on the findings. He became very agitated, bit this reporter on the face, and said: "oot-oot... eek-eeeeek...brraaaat".
Posted by Jef Clark at 6:08 pm