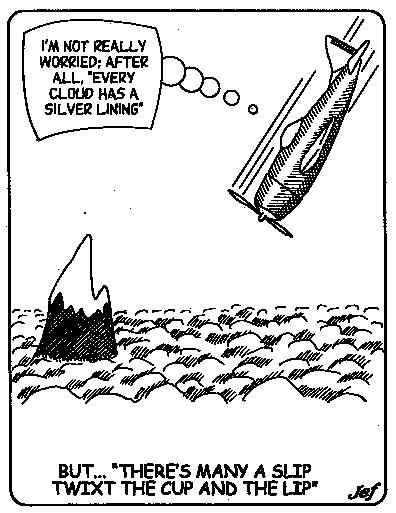 A false analogy occurs when an advocate presents an example of a phenomenon and implies that the example either proves or compellingly illustrates something about another phenomenon. An example might be an argument that access to firearms should not be severely restricted, as access to kitchen knives is not severely restricted and yet, like firearms, they are sometimes used to kill innocent people. This analogy deliberately ignores critical differences between guns and kitchen knives. Such an example might have some value as a figurative analogy (the purpose of a figurative analogy is illustrative and metaphorical) but it is obviously flawed if it is intended as a literal analogy (advanced as a proof).

Glenn Tropicana is an investment adviser and he is giving a sales pitch to a couple of prospective clients, Sheila and Dennis. Glenn is trying to persuade them to sign up for a regular monthly contribution to an investment scheme. The scheme may or may not be suspect – that is not the issue here.

During his spiel, Glenn states: "You know what happens with a steady drip of water into a bucket... before you know it the bucket's full. If you invest only $200 a month, in no time you will have a great nest-egg."

Dennis replies: "That's all very well, but what if there's a hole in the bucket that we don't know about?"

Glenn has met his match in Dennis. Glenn attempted to use his analogy of water dripping into a bucket as a compelling illustration of the wisdom of making a regular contribution to the scheme he is promoting. However Dennis is clearly a critical thinker and a skeptic. He recognised the fallacy in the analogy. When he recognised the fallacy he could simply have said: "Investments are a lot more complex than water dripping into a bucket – you'll need to present me with a better argument." However he chose to use Glenn's analogy against him by extending it, and introducing a confounding variable – the possibility of a leak in the bucket.

A common problem with the use of analogy to support an argument is that another analogy can usually be found to support the opposite position. For example, there are many metaphors, proverbs, clichés, traditional homespun sayings etc., which seemingly contradict each other. Consider a situation where someone may try to make a case for increasing the number of workers in a project team by citing the venerable proverb "many hands make light work". The proverb seems to be self-evidently true, and supports the notion that an increase in the size of the team would be a reasonable position to take. However someone else could use a plausible counter-proverb to support the opposite point of view, viz: "too many cooks spoil the broth". The latter proverb invokes a common experience of some large teams – separate agendas, miscommunication and a lack of coordination.

The fact that many proverbs are directly contradicted by other proverbs is an indication that reliance on proverbs or analogies in decision-making or resolution of issues is fraught with danger. We might (for example) be presented with an exciting once-in-a-lifetime business opportunity. We mull over the decision. A series of proverbs come to mind – opportunity only knocks once; make hay while the sun shines; seize the day; strike while the iron is hot. We invest. We go broke. Reflecting on out financial disaster, another set of proverbs comes to mind – look before you leap; act in haste, repent at leisure; haste makes waste; there's many a slip twixt the cup and the lip; don't count your chickens before they hatch.

All this isn't to say analogies are not of any use. Analogies work best when they are used to illustrate a more complex or abstract point. In particular if it can be related to something the audience is already familiar with. Analogies are frequently used in teaching, in science in particular. See for example:

As critics have noted, it seems gratuitous to provide someone incentive to do what they already enjoy; in the parlance of behavioral studies, it's a case of "overjustification". Rewarding children who draw with markers, after all, is like rewarding kids with ice cream sundaes for watching television.

And a bad one:

To judge the necessarily variegated skills of students and teachers with an endless series of tests is as absurd as it is unfair-like putting huge scoreboards in classrooms and expecting adults and children to teach and learn under their imposing glare.

I often wonder whether real conversation in real time may eventually give way to these sanitised and easier screen dialogues, in much the same way as killing, skinning and butchering an animal to eat has been replaced by the convenience of packages of meat on the supermarket shelf.