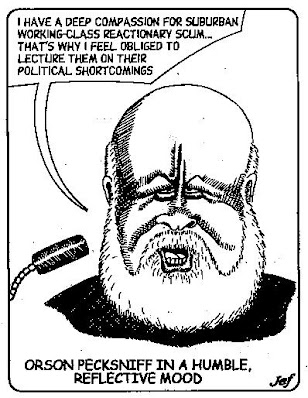 The advocate represents his or her position as morally superior to the opponent's, and links this by implication to the "correctness" and validity of the advocate's position.

This is a fallacy when the supposed moral high ground is merely asserted or appropriated by the puffed-up advocate rather than legitimately acquired through reasoned argument. Most sanctimonious claims to the moral high ground are either deluded or self-serving. Deluded prigs are often unable to recognise the circularity of their claim to moral superiority – viz: "I am morally superior because... um... I am morally superior."

The preening and morally superior advocate may be attempting to avoid scrutiny of a weak argument by placing a taboo on the opponent's position, or by "ruling out" his or her line of argument beforehand. That is, the line of argument taken by the opponent is deemed to be "beyond the pale" and could not even be considered by any "right-thinking person". Note that some sanctimonious advocates may be well-meaning but unable to distinguish between what ought to be true and what is true. (See wishful thinking in argument to consequences.)

Orson Pecksniff is the host of a syndicated radio talk program which goes to air live between 3am and 4am on Sundays. Orson's producer is Gerry O'Waldheim, a like-minded inhabitant of the same inner-city boutique suburb. On their promotional website, Orson and Gerry assert that they are both committed to a cutting-edge program which fearlessly engages with difficult social and political issues in order to secure social justice for the underprivileged. In fact, the featured guests are carefully selected to ensure that their views are in accord with those of Orson and Gerry. Orson's interviews usually amount to nothing more engaging than amiable conversations with a sympathetic guest.

Tonight Orson is interviewing Jeanne Streetwise who has written a book called The Perils of Colonialism. Orson has prepared for the interview by scan-reading a precis of the book prepared by his research assistant. He launches into the interview with his usual confidence. However it soon becomes apparent that Orson has misread the situation. The title is in part ironic, and Jeanne's wide-ranging treatment of the topic is critical of both colonists and the critics of colonists. Further, she makes the case that the wealthy middle class is currently colonising the inner city precincts of capital cities. In so doing, they are advantaging themselves at the expense of the urban poor. She finishes by declaring: "Inner-city suburbs are colonised by individuals rather than nation-states, but the process is still about the dominance of the powerful over the powerless."

Orson back-announces Jeanne and her book, waits for her to leave the studio, draws a breath, recovers his composure and then editorialises: "Well, Jeanne believes that something can be said in defence of the European colonial powers who engaged in a savage war of conquest against native peoples... Such a position is so self-evidently obnoxious and immoral that it doesn't deserve to be taken seriously."

Orson is entitled to disagree with Jeanne, but his position cannot be credible until he has carefully considered her arguments. His dismissive statement is without merit. It clearly positions him as an empty vessel, full of sound and fury, but signifying – nothing. His instinctive response to discomfiture is ego-protection. His sanctimony is shallow and visceral rather than well-founded.

The seeker after truth will recognise this type of blustering response as a feint designed to let the poseur off the hook. When sanctimony is encountered in a discussion, the debunker will call the bluff, label the tactic moral posturing, and press on regardless.

"Democracy is a joke. How on Earth did Gertrude McTockinbride win the election? The system is broken if it allows someone with those views to win. I'm just embarrassed that the ignorant masses can't see her for what she is. Anyone with a reasonable level of intelligence would know that to vote for her is a vote for backwards views and will damage the progress we've made over the last decade. You should have to pass a test to be able to vote!"