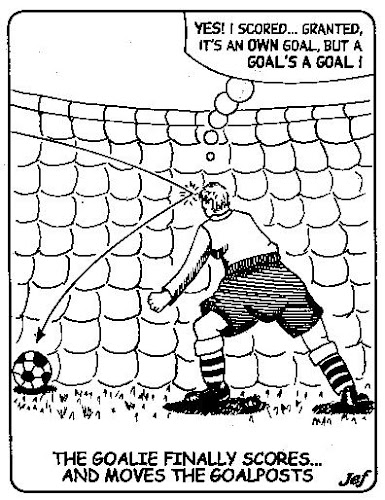 The advocate changes the nature of the discussion by seeking to make the opponent tackle a more difficult version of the topic. The topic that was originally under discussion is recast and the new version favours the advocate. This tactic is often used when the backpedalling advocate feels that he or she is about to lose the argument. With the "goalposts" in their original position, the opponent would "score". But with the posts moved, the opponent's "shot" is now "off target".

1. Bella Donna claims that Sybil Antwhisper, her room-mate, is not sharing the housework equitably. Sybil tells Bella to go away and itemise and record who does what household tasks. If Bella can show that she does more housework than Sybil, then Sybil will mend her ways. A week passes and Bella shows Sybil clear evidence that Sybil does not "pull her weight" around the house.

Sybil (the advocate) responds: "That's all very well, but I have more work and study commitments than you do – you should do more housework than me... it's the total work of all kinds that matters, not just housework."

2. Three weeks out from the State Election, the Premier and Leader of the opposition are taking part in a televised debate. The issue in contention is the running of Public Hospitals under the current government. The Leader of the Opposition, Ken Oath, is making his point: "Under your government, the average waiting times in emergency rooms is four hours. Now that's just not good enough."

The Premier, Phillip Ingheck, replies: "I agree, four hours is clearly not good enough. That's what it was before we came into office. Under my government the waiting time has actually been reduced from four to two hours." Ken responds: "Well that's not the real issue anyway, it's waiting times for operations."

In the first example the implied agreement between Bella and Sybil at the outset was that the amount of housework done by both parties should be approximately the same. When Sybil was confronted by the evidence however, she quickly and unilaterally "changed the terms of the debate". She did this because the evidence was against her version of events and she was about to lose the argument on the issue as originally defined.

Whether or not it is morally right to count all forms of work when assessing household contributions is not the issue here. The issue here is that the ducking and weaving advocate (Sybil) is seeking to change the terms of the dispute to avoid a defeat on the original issue in contention.

In this situation, and if Bella is a skeptic and critical thinker, she would point out that Sybil was attempting to move the goalposts. She would insist that they resolve the original question as agreed, and that any further discussion or extension of the issue would have to be considered separately. If the issue had originally been defined as "total work" rather than "housework", then Sybil would have a point. As it is, her argument is weak and ethically suspect.

In the second example Ken realizes that he had initially used out of date information which did not support his case. Instead of acknowledging this, he attempts to change the focus of their discussion on Public Hospitals from emergency room waiting times to waiting times for operations. Phillip would be well advised to point this shift in focus out, and say that he is more than happy to discuss this new issue (waiting times for operations) once the first issue has been resolved.

Moving the goalposts can be avoided if both parties agree at the outset to clearly define the parameters of the discussion. Time spent doing this is time well spent. Otherwise discussions can become misdirected, frustrating and pointless.

Lots of squealing from the left… about Kerry Packer minimising his taxes. …But they’re wrong about Packer. In fact, he paid far too much. If anything, Packer was overly generous — every year he and his companies paid millions more than they needed to. Over his career, Packer possibly paid billions more than was strictly required... In wages. [Blogger Tim Blair defending former media tycoon Kerry Packer <http://timblair.net/ee/index.php/weblog/comments/packer_attackers> Emphasis in original.]
Posted by Theo Clark at 8:10 am