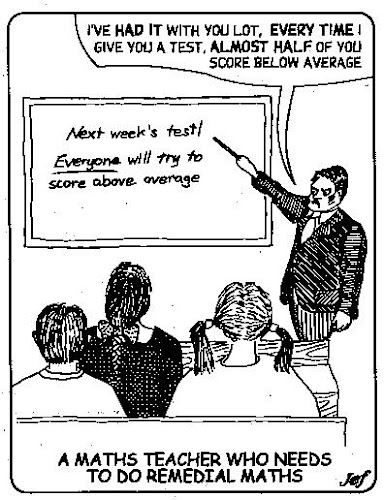 Scott Armani raises a delicate issue with his boss Phil Greenspan: "What am I going to do about the average wage of the employees in our third world factory for this report? We need to make it look like we pay decent wages."

Phil responds:e "Easy to fix. Just include the factory manager's pay rate and the average should come out nicely."

Karl Vladimir Eyemnotrite is the editor of the monthly Stalinist newsletter, We've Still (sort of) Got China, Cuba and North Korea. Writing in his usual opinionated style, he editorialises against the recent attempt to introduce laws to ban gay marriage.

"The problem with laws like this, is that they are judgmental. They tell us how to live. But we are in no position to judge anyone else. In order to judge, we must first be able to observe. Einstein showed us, with his theory of relativity, there are no privileged observers. Everything is relative. Quantum physics adds to this. The act of observing (or rather judging) changes the properties of things. So given these two fundamentals of physics – everything is relative, nothing absolute, and observations change what we are observing – how can we judge something like gay marriage if it does not harm us directly? The answer? We can't."

In the first example, Scott has not technically lied in his report, but he has used a statistical technique to create the impression the company prefers. The average chosen for the report is the mean. It is one of the three most common measures of central tendency – the others are the median and the mode. The mode of Scott's data range (that is, what most of their employees are paid per hour) is $1.00. The median pay, (the middle number when the data is arranged in ascending order) is $2.00 per hour. Through the selective use of statistics Scott (on the advice of Phil) has painted the picture he wants for the report.

In the second example, Karl Vladimir has cited two concepts of modern physics to back up his claim. These are theories of the physical world and say nothing about ethics or law. Thus they are being misused. In this book we do not take issue with gay marriage (what two or more consenting adults get up to and label it is entirely up to them), but we do take issue with fallacious reasoning, such as Karl's argument raised in his editorial, which misuses a theory and is therefore flawed.

The best defence for seekers after truth – against being deceived by the misuse of information – is to do their "homework" on the topic under consideration. This is only really possible if the general topic of discussion is known beforehand (in the case of verbal discussion), or if time is available for follow-up reading (when the misleading material is in a publication). If the misleading material is offered during a spontaneous discussion, in the age of internet enabled smartphones, a quick query on a search engine could be enough to call a sciolist's bluff.

That being said, the best recourse for the skeptic is to question advocates closely on the details of their claim, and to be alert for circular arguments, weak premises, unwarranted inferences and weak or unconvincing anecdotes. Close questioning often reveals that ill-informed advocates know far less about the topic than they claim to know. We have certainly found that at least 100% of those few people who routinely disagree with us know five eighths of three fifths of nothing at all about anything.