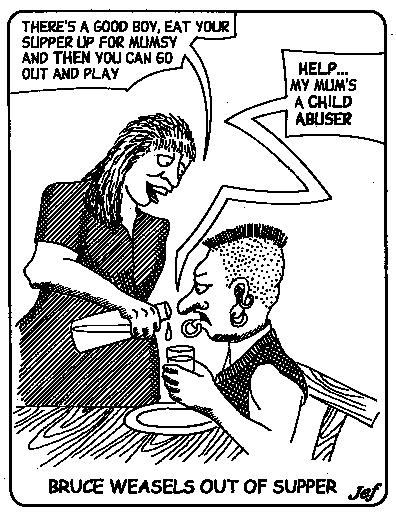 The phoney advocate uses euphemisms, dysphemisms or emotionally loaded labels to boost his or her own position or to undermine the opponent's position. The general descriptor weasel words is a metaphorical usage which connotes a "weasel-like" slippery evasion. The fraudster, in using weasel words, seeks to misrepresent the issue under discussion by avoiding an accurate and factual description of the topic.

Hazel Clavicle the peace activist and Irwin Tammany the former Minister of Defence are being interviewed by Bob Sizlics on a current affairs television program. The topic under discussion is the French bombing campaign in support of the rebel alliance fighting government forces in the Republic of Mukalukaluk.

After viewing footage of bomb damage, Bob asks them both for a comment on civilian casualties. Hazel claims the damage is evidence of genocide. Irwin says that collateral damage is always regrettable.

Both Hazel and Irwin may be sincere in their beliefs. However both are obscuring the reality of the issue by using weasel words.

When Hazel describes the situation as "genocide", she is seeking to equate war-zone civilian casualties with the deliberate mass killing of non-combatant ethnic groups because of their ethnicity (i.e. actual genocide). She is appropriating a legitimate and essential term for her own corrupt purposes. She is using "genocide" as a dysphemism. In doing so she compromises its accepted meaning and reduces its potency and precision. Over time, widespread misuse of the term will leave us with no label for actual genocide in common usage. A by-product of watering down such a term is the comfort it provides to perpetrators of genuine genocide.

Irwin's euphemistic use of "collateral damage" is intended to distance the viewer from the human drama and tragedy which is the outcome of almost any bombing campaign. Civilians are, after all, people. Collateral implies buildings and real estate rather than individual human beings.

If Bob, the interviewer, were a seeker after truth and a good journalist, he would challenge both his interviewees on their tendentious use of terminology. He would ask them to justify their usage. If he did this, and pursued the matter, they might even both agree that they are talking about "civilian casualties" rather than genocide or collateral damage. If participants involved in any discussion agree to reject the use of weasel words (in favour of precise descriptions), the discussion is much more likely to result in a fruitful outcome.

Mealy-mouthed weasels commonly accuse their opponents of not being "open-minded". The seeker after truth will treat such accusations with skepticism. The weasel may simply be using a disparaging label as a rhetorical tactic. The "thought processes" underlying the accusation might be something along the following lines: "My opponent does not agree with me. Further, because I believe I am open-minded, my opponent's disagreement must mean they are not open-minded."

Corruption of a useful term like “open-minded” by closed-minded weasels should be attacked with vigour at every opportunity. After all, it could be that those claiming to be open-minded are in fact closed-minded to the fact they are full of crap.

"You see, [Obama] believes in redistributing wealth, not in policies that help us all make more of it. Joe, in his plainspoken way, said this sounded a lot like socialism." John McCain during the 2008 Presidential Election (http://www.cnn.com/2008/POLITICS/10/18/campaign.wrap/index.html). Accessed 2 November 2008.

“Indigenous people have the answers and we need collaborating, not using a jackboot to seize powers.” Then leader of the Australian Democrats – Lyn Alison (http://news.bbc.co.uk/2/hi/asia-pacific/6229708). Accessed 28 June 2008.

“In plain English, what does it mean when students ‘achieve a deficiency’ or reach a ‘suboptimal outcome?’ It means they failed. A ‘suboptimal outcome’ is even worse in a hospital. It means the patient died. The airline industry sometimes speaks of a ‘hull loss.’ What it means is that a plane just crashed. Here’s more twisted language: your doorman is now known as an ‘access controller,’ and a receptionist is a ‘director of first impressions.’” John Leo. The Office of Assertion - Some thoughts on writing well (http://www.city-journal.org/html/eon2007-05-21jl.html) Accessed 15 April 2009.