In Part One I outlined the three broad tests I apply for examining a claim:


1. LMGTFY (let me google that for you)
2. The Plausibility Test (is it really even plausible?)
3. Empirical evidence (Okay, google wasn't definitive, and it sounds plausible, so what does the evidence say?)

I applied these to the 'we only use 10 percent or our brain' myth, which immediately failed the 'lmgtfy' test. This post will examine the claims made in a reasonably popular education program called 'Brain Gym'.

When you google Brian Gym, you do not get a black and white answer as to its efficacy. You get some official websites and a wikipedia entry. Brain Gym passes the lmgtfy test, so we move on to consider its plausibility.

From the aforementioned wikipedia entry:


The Brain Gym program is based on the concept that learning challenges can be overcome by carrying out certain movements, the use of which will create pathways in the brain. The repetition of the 26 Brain Gym activities (each of which takes about a minute to do), is said to "activate the brain for optimal storage and retrieval of information."

Already my skeptical hairs are beginning to stand on end. But, it's still not clear cut. Doing some form of physical activity always wakes me up and makes me feel more alert, thus 'optimizing' my brain. Exercise is good for you. No problems with that. However, there clearly is more to it than this.

It's at this point I ask 'what are they saying?' A common problem encountered when attempting to understand the reasoning behind a claim is the wording of the claim itself. A necessary condition for further investigation of Brain Gym is therefore clarity about their explanatory framework. Brain Gym is more than just 'exercise breaks'. They make explicit claims, that particular exercises effect specific regions of the brain and thus prepare students for specific types of learning. Let's consider some examples. If a picture says a thousand words, a video must say three, 'dumb, dumb and dumber'.
Okay, I've seen enough. This is just embarrassing.


Pressing "Brain Buttons" activates the brain for sending messages from the right to the left hemisphere, increases the flow of electromagnetic energy and is good for reading.

"Hook ups" connect the body's electrical circuits for emotional centering and help students take tests and work at the keyboard.

The claim that a specific exercise relates to improvement in a specific learning area or type of cognition is implausible. It contradicts what we know about how the brain works.
To the credit of Brain Gym, compared to say astrologers, they are specific enough that a blinded trial could easily be conducted to confirm or falsify their claims. To their discredit, as they state on the Brain Gym website, they only have anecdotal evidence and observational studies, which by definition are inherently flawed.

This post is not a critique of Brain Gym per se. This is about applying some basic skeptical principles when initially examining any claim. With a claim, such as those made with Brain Gym, we can see it immediately contradicts well established facts about how the brain works. It is, to use a technical term, pseudoscientific bullsh!t. At this point we do not need to keep on investigating Brain Gym. It is implausible; there is no need to look for any evidence of its efficacy. We can dismiss the claims of Brain Gym without much of a fuss. 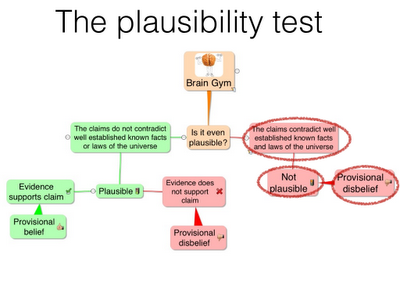 In order to change my mind about Brain Gym, the known facts would need to change, or, I would need to be provided with some extraordinary evidence of its efficacy. This evidence absolutely must be more than anecdote and observational studies.

Just in case you still weren't sure that Brain Gym was a bunch of made up crap, I'll enlist the aid of Jeremy Paxman who induces this third party facepalm from Brain Gym's creator Paul Dennison "PhD". He's from California...
Occasionally you'll hear people discuss the nervous system and the brain, using the idea of circuits. Hell, I often refer to myself as a meat robot. But clearly when doing this we are speaking metaphorically. Dennison is being literal.

When describing a difficult scientific concept to lay people, it's perfectly acceptable to use analogy. However, it's unacceptable to not also describe what is actually going on. The analogy should be used for illustration only. This is even more important when being directly challenged about an explanation for a claim, as Dennison was in the clip above.

Note he also brings in the usual non-specific and meaningless term 'energy', 'midpoints' etc., all throwbacks to 'vital force' / 'life force' used by people ignorant of biology. That is, his educational pseudoscience is an extension of medical pseudoscience.

Why am I picking on Brain Gym ? Isn't it just harmless exercise? If that's all it was, that would be fine. But, it's a commercial program that schools waste good money on. More importantly, its explanatory framework is pseudoscientific bullsh*t. The job of a teacher is to tell children about how the real world works. To teach children how to think critically. Ironically, the harm being done to children's brains by this almost certainly outweighs any good the exercise does.

The clips above are from BBC's Newsnight and were sourced via Bad Science. There you will find links to the complete and unedited Newsnight clips on YouTube. For further critiques of Brain Gym see: