OBAMA AND THE BURDEN OF SOLUTION 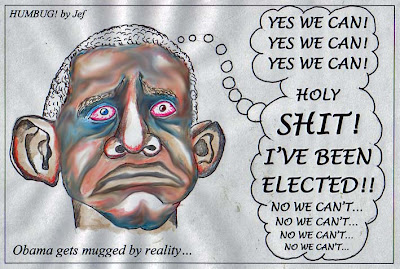 No particular reason for focussing on Obama. Any candidate vying for office is smacked upside the head when elected. They find suddenly that they are responsible incumbents rather than self-indulgent rhetoricians sniping from the sidelines. In other words, they have to accept the Burden of Solution.

If any reader thinks I have not been sensitive enough to cultural issues in this post, this is to let you know that I am offended in advance. This is because you are demanding that I dishonour and repudiate my viking and spanish heritage. Why? Both of my ancestral lines traditionally conquered without giving a shit about local inhabitants (or the sensitivities of cultural police who presumed to speak patronisingly on behalf of others).

Alright, I admit it. Some of my ancestors were English hand-wringers. Their descendants are the patronising cultural police I sneeringly refer to above. No wonder I am conflicted!
Posted by Jef Clark at 1:14 pm