I posted a "name that fallacy" a few weeks back: The perfect solution to speeding, not quite, and asked people for their vote as to which fallacy was what. Results, which I concur with, are posted below:

PARENTS will be able to control the speed at which their teenagers drive the family car with a computer chip developed by carmaker Ford.... It announced this week that from 2010, its US Focus models will limit teen drivers to 130 km/h using a computer chip called MyKey.

1: ...The mother of a Melbourne teenager killed in a high-speed car smash doubted the value of the technology. Doris Loizou, whose 17-year-old son George was one of four teenage boys who died in a crash last year while driving at up to 160km/h, said she did not think the devices would save many lives. "If the driver's an idiot and drives like a maniac you cannot control that," Mrs Loizou said. "If someone inexperienced is driving at 100, 120-130km/h and they hit a wall on the side you still can't control that and can still have a serious accident. 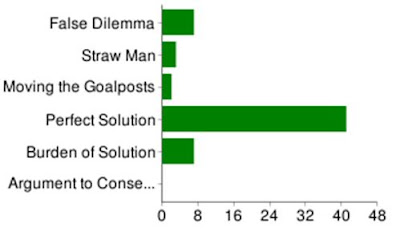 This is the Perfect Solution Fallacy (the original post title might have been a give away). "…she did not think the devices would save many lives. "If the driver's an idiot and drives like a maniac you cannot control that…" True, but if it reduces accidents and deaths by even 5% (or any arbitrary number), then it could be a part of the solution. It's very rare that one solution is the solution. Most social problems require multiple and mutually reinforcing solutions.

2: Mrs Loizou said restricting the number of passengers P-plate drivers could have was a better idea. "George was not driving, he was just one of three passengers, which makes it too hard, they should have just one passenger which is more important," she said. 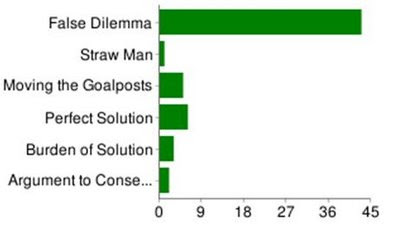 Here's another potential solution to add to minimising road deaths: "...restricting the number of passengers P-plate drivers…". But why choose between one and the other: "…could have was a better idea." and
turn it into a False Dilemma?
Posted by Theo Clark at 3:44 pm