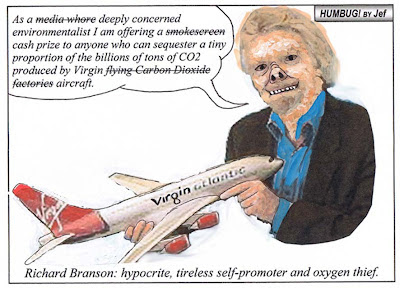 First, I promise to never use collage and gouache in one of my cartoons again. An embarrassment, but I am too lazy to re-do it.

Text below is from this news item.

Sir Richard announced the $US25 million ($32 million) Earth Challenge prize at a joint press conference with Mr Gore, who has turned into to a global environment campaigner after losing the presidential election in 2000.

"I want a future for my children and my children's children. The clock is ticking."

It is not the first time Mr Gore and Sir Richard have teamed up to promote green issues: last September Mr Gore backed the tycoon's pledge to spend $US3 billion ($3.8 billion) on reversing global warming.

The former vice-president, who brought global warming to prominence in his documentary film, An Inconvenient Truth, told the Virgin boss at the time that he was in a unique position to make a difference.
Posted by Jef Clark at 5:23 pm