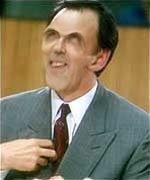 This is how it used to go down in the House of Reps (aka the lower house). Paul Keating (pictured thinking up another gem), the Prime Minister before the current fellow, was the master of ad hominem. From the Paul Keating Insults Archive:

"...You stupid foul-mouthed grub." "Shut up! Sit down and shut up, you pig!" "You boxhead you wouldn't know. You are flat out counting past ten."

On Former Leader of the Opposition, John Hewson:

"(His performance) is like being flogged with a warm lettuce." "I was implying that the Honorable Member for Wentworth was like a lizard on a rock - alive, but looking dead. " "I have a psychological hold over Hewson...He's like a stone statue in the cemetery. " "I'd put him in the same class as the rest of them: mediocrity."

"...if this gutless spiv, and I refer to him as a gutless spiv..." "...the Leader of the Opposition's inane stupidities." "He could not rise above his own opportunism or his incapacity to lead." "I suppose tha the Honourable Gentleman's hair, like his intellect, will recede into th darkness." "The Leader of the Opposition is more to be pitied than despised, the poor old thing." "The Liberal Party ought to put him down like a faithful dog because he is of no use to it and of no use to the nation." "We're not interested in the views of painted, perfumed gigolos." "It is the first time the Honourable Gentleman has got out from under the sunlamp." "...a fop such as the present Leader of the Opposition."