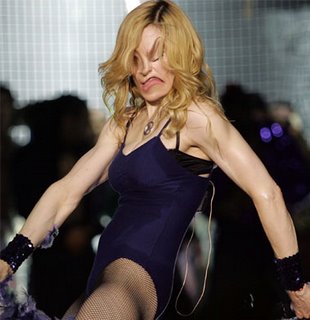 This is hilarious. Much like Scientology, it’s either another WTF? Fallacy or a hoax:

Madonna and her husband, Guy Ritchie, have been lobbying the British Government and nuclear industry over a magic cleaning solution.

"It was like a crank call ... the scientific mechanisms and principles were just bollocks, basically," one official said.

...The Kabbalah Centre, which is based in California, believes water is a uniquely important substance that can be given magic healing powers through "meditations and the consciousness of sharing".

...her campaign became bogged down by Whitehall bureaucracy. "It was a case of pass the parcel," the public servant said.

The lobbying, which took place a few years ago, was part of a campaign by Madonna, who saw it as her mission to rid the world of nuclear waste...

"I mean, one of the biggest problems that exists right now in the world is nuclear waste," she said. "That's something I've been involved with for a while with a group of scientists - finding a way to neutralise radiation, believe it or not."

The Kabbalah Centre... was set up by Philip Berg, a former insurance salesman. [That should ring the alarm bells - apologies to insurance salespeople reading this cheap shot.] One devotee has described how Berg leads chants of "Chernobyl" and the names of other nuclear power plants. Followers believe this helps "heal the problem of nuclear waste".

Undercover reporters who attended a Kabbalah Centre dinner in London described how Madonna and Ritchie were among guests who turned east towards Chernobyl and began shouting its name.

That had me laughing, however this is hysterical:

Madonna has said: "According to science, we aren't going to have a planet in about 50 years at the rate we're going with nuclear waste.”

"I can write the greatest songs and make the most fabulous films and be a fashion icon and conquer the world, but if there isn't a world to conquer, what's the point?”

What an admirable aim. (Though completely implausible - Madonna, make the most fabulous films etc? Hasn’t she ever watched her own work? Ha, ha, ha...)

But how to do this exactly?

The Kabbalah Centre is believed to have sponsored Oroz, a "23rd-century" research body in New York that heralded a "breakthrough" in neutralising radioactive waste.

Artur Spokojny, the director of Oroz and a Kabbalah follower, is said to have developed a "revolutionary" decontamination agent called Orodyne, which can reportedly also treat gynaecological problems in cows and sheep.

I wasn’t aware that cattle could have radioactive vaginas?

Only 50 years left for the Earth... a fairly urgent campaign should be stepped up somewhat I'd imagine? What do you think Madonna?

Madonna was not available to comment at the weekend because she is on tour in Germany.

How about you Guy?

A spokeswoman said: "I've spoken to Guy's office and I don't think he is going to be available to talk about this ... I don't think it's top of the list of things they are working on at the moment."

Perhaps I'm being unfair? From the photo we can see that even on tour Madonna is doing her bit. She is grimacing with concentration, directing her "vibes" down through the Earth towards Pennsylvania, yelling, "Three Mile Island! Three Mile Island!"
____________-
Hat tip Ben