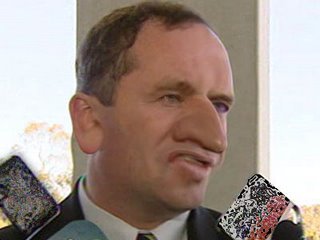 …about as well as Roseanne Barr would fit into Kate Moss's thong, not at all.

Don’t get me wrong, I’m all for inquiries into petrol prices. however National Senator Barnarby Joyce might need to come up with a better argument than this False Analogy:

Nationals Senator Barnaby Joyce has ridiculed an assertion from the competition watchdog that neighbouring service stations putting up their prices at the same time is not necessarily collusion...

No, it's not really like saying that. His simile is as close to being accurate as stating: “Paris Hilton is one classy lady”.