Faculty follies - a taxonomy of academics on the make 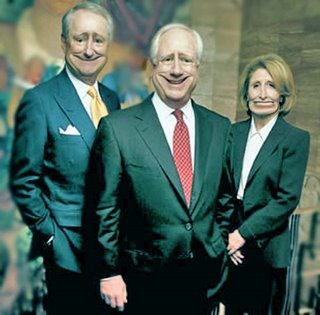 The picture on the left is unsourced. I photoshopped the original to make the three individuals look even more inane than they appear in the source photograph. I have made them look more inane so that they can more credibly represent three types of academic which now infest universities. The three types are all on the make, they all "power-dress" in corporate clothing, and they all bear little or no relationship to academics from the fondly remembered past.

Spivs are sharp-dressers, talk up a storm in meetings (without really saying anything of substance), flatter superiors, and relentlessly network (rather than generate or disseminate knowledge). They laugh a lot (usually loudly) but don't have a sense of humour.

Lurk merchants spy out the landscape - with an eye particularly to identifying any bandwagons which are likely to trundle by. They are essentially amoral careerists, who always "research" the hot topics (that is, fashionable topics), and make sure they come up with results acceptable to colleagues and funding bodies. Lurk merchants look after each other, but only on a "what's in it for me" basis.

Urgers are cultish enthusiasts for a particular world-view. They are control-freaks who wish to have their own views on their pet topics prevail. In the remote past, they used to form small communities in the wilderness and store imperishable foodstuffs against an imminent invasion by flying saucers... or perhaps amass weaponry to defend themselves against freemasons and telephone companies. Nowadays they have a home in academe - as postmodernists, poststrucuralists, semioticians etc. They express their aggression by conducting witch-hunts against skeptical colleagues and rational students.

I will elaborate on these three types, and give examples in later posts.