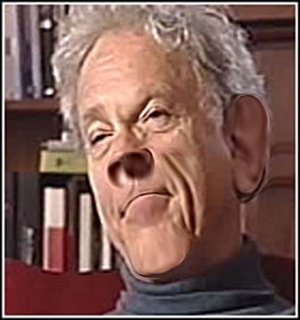 As noted in the previous post, some academics, particularly in the social sciences and humanities are spivs. Henceforth, I shall call spiv academics spivademics. The distortature here is an unflattering manipulation of the visage of Professor Henry Reynolds. Professor Reynolds is an exemplar of a particular type of spivademic. He is a celebrity "intellectual" and media-junky spivademic. The original from which this distortature was constructed is a screenshot from one of his frequent television appearances. A google search on "Professor Henry Reynolds" will generate a great many hits... but the hits are overwhelmingly within dumb-ass print and electronic media sites. This profile of hits is typical of a media-junky spivademic. He may have done some useful work once, but is unlikely to do so again, now that he has become addicted to relentless self-aggrandizing and public posturing.

Another media-junky spivademic is Professor Robert Manne - I have already dismissed him and all his works elsewhere, so I will not do so again here.

The other type of spivademic works within institutions and small academic networks, rather than seeking a high profile outside academe. Such spivademics are unquestioning corporate animals and have never met a boss they didn't like... a whole lot... So much so that they can't help expressing public admiration for any persons in authority who might advance their careers. This type of spivademic tries to "power-dress" and aspires to the general appearance and demeanour of a successful pyramid-scheme salesperson. However they just don't quite look the part - they fall short of their aspirations because their taste in business wear was formed and fixed for all time during their heady days as a goody-twoshoes school prefect. Henceforth, I shall call this type of spivademic a head-prefect spivademic.