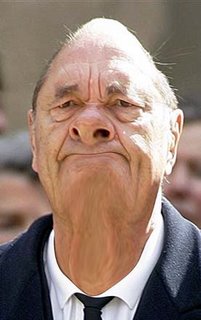 I have noticed the over-use of two weasel-expressions in newspaper accounts about meetings, gabfests, conferences and the like.

A delegate to such a conference who merely walks out with dignity, is often said to have stormed out, or even fled the assembly.

Jacques Chirac is reported to have both stormed out, and fled at a recent meeting.

Journalists given to using such emotive descriptions are untrustworthy witnesses to such events. People rarely storm or flee. They mostly walk - perhaps briskly. (Although in defence of the journalist in question, I do think the photograph taken at the time indicates that the pointy-headed cheese-eater in question appeared to be really cheesed off about something or other.)
Posted by Jef Clark at 10:17 pm