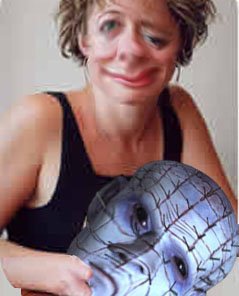 The following serves as an example of a common practise of TV current affair shows and especially "special investigations". Besides their usual Stacking the Deck, they more often than not engage in Advocacy Research.

This is from science writer Simon Singh:

The BBC series Alternative Medicine was widely regarded as a great success: ... glowing reviews and high profile news stories about it.

Though I haven’t seen it, from reading Singh’s article it does seem that the program Stacks the Deck. On top of this, the presenter’s interpretation of the experimental evidence cited in the show is an example of Advocacy Research. Singh continues:

The experiment showed images of the brains of patients undergoing superficial and deep needling. [The presenter, Kathy] Sykes summarised the results: "Acupuncture was having a real effect on the brain and it was doing something completely unexpected. It was a result that surprised us all ... The bit of the brain that helps us decide whether something is painful, we think perhaps is being affected by acupuncture and so maybe that helps to explain why acupuncture can help with chronic pain." The experiment was reported with national newspaper headlines such as "Acupuncture does combat pain, study finds".

However, Professor George Lewith ... [although] sympathetic about some of the claims of acupuncturists, he contradicts the way the experiment was described: "The experiment was not groundbreaking, its results were sensationalised and there was insufficient time to analyse the data properly and so draw any sound conclusions. It was oversold and over-interpreted. We were encouraged to over-interpret, and proper scientific qualifications that might suggest alternative interpretations of the data appear to have been edited out of the programme. Because the BBC had funded the experiment, they wanted their money's worth - that's not a good basis for science."

I couldn’t put it better myself, so I won’t.

BTW - I have nothing against any alternative/complementary therapy per se, but its efficacy needs to meet the same high standards as set by modern medical science. Proper enforceable regulation of alternative/complimentary therapies also needs to take place. Not only to protect patients from fraudulent quacks, but also for the benefit of practitioners - those who are genuinely interested in helping people and taking their field out of the "alternative" and into the "mainstream" of evidence based medicine. After all, if it works, they've got nothing to worry about.