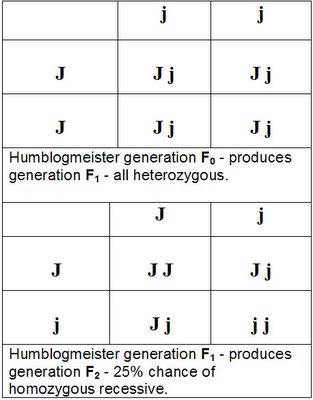 I've discovered that "Seeing the point in Jim Soorley" is a recessive allele of the "Soorley on Sunday" gene (SOS gene).

Readers of Humbug! Online might recall a post at the New Year where I asked the question: "What's the point in Jim Soorley?" I couldn't see it.

However, Jef considered Soorley to be an inspiration.

My newborn son, Hayden, has also found a point in Jim Soorley. I reached this conclusion thanks to Hayden's recent arrival and his burgeoning sense of intellectual adventure and use of humour to make a point - much like his Father and his Father's Father.

The Punnett squares (remember back to your high school biology classes) above illustrate the following reasoning (J = dominant, can't see the point. j = recessive, can see a point):

Hayden is the newest generation of Humblogmeister (generation F2). He found a point to Jim Soorley. Given I was unable to do so (and neither can my wife) he must be homozygous for the recessive allele (can see a point) of the SOS gene. There was a 1/4 chance of this happening.

My wife and I (generation F1) must both be heterozygous for the SOS gene. I.e., we have both the dominant (can't see the point) and recessive (can see a point) alleles of the SOS gene - hence the phenotypic expression of "not seeing the point in Jim Soorley". (Neither of us could be homozygous dominant as if one of us was, Hayden's phenotype would not express the "can see a point" allele.)

Jef (generation F0) is the same as Hayden, homozygous recessive, but his wife (my Mother) is most likely homozygous dominant - as none of my siblings could find any point in Soorley and neither could she.

As far as I can figure, this is the only possible explanation for "being able to see a point in Jim Soorley" skipping a generation.

Oh, I forgot to say what point Hayden found in Jim Soorley.

I was changing a filthy, filthy, (I can't emphasise enough, just how disgusting it was) filthy nappy this morning. I didn't have anywhere to put the poo covered baby wipes and used nappy. Hayden was gesturing in the direction of the floor. I looked in that direction and noticed the Sunday paper was lying there - coincidentally open to Soorley on Sunday. I could have sworn Hayden was deliberately pointing at it! So without further ado I dumped the soiled items on Soorley's face. Hayden had found a point to Jim Soorley - wrapping up crap. (Note that he also vomited when looking over at Soorley on Sunday - further evidence he knew what was going on.)

(Okay - so I may have over exaggerated all that - quite a lot - poetic licence and all… Does it have to be in the form of a poem for me to claim poetic license? However - I did actually wrap up the soiled nappy with Soorley on Sunday - much to my amusement.)
Posted by Theo Clark at 5:22 pm