What's the point in Jim Soorley? 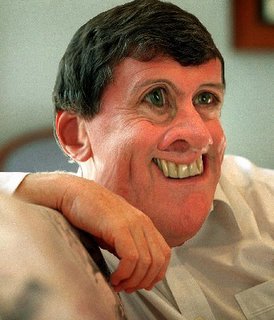 He's like a car accident, I know I shouldn't look (read him) because I'll regret it (in fending off the inanity of his "thoughts" I will be forced to bite off my own tongue), yet I invariably do (when I buy the Sunday Paper).

His inconsistencies and invincible ignorance drive me to distraction. For example, he gave us (this Sunday) some "awards" for the year (Packer good, Rumsfeld bad):

The Packer Award to the federal and state agencies who got ahead of the terrorist planners in Sydney and Melbourne and made preventive arrests.

The Rumsfeld Award to John Howard who could not help but grandstand on the issue just days before the arrests, putting at risk the whole operation.
In one sentence he Impugns the Motives of the PM (without any rationale), and delivers a Factoid Propagation (putting the operation at risk). (That's only two fallacies in one sentence, so it'll be a while before he catches Phillip Adams.) And Jimbo conveniently ignores the fact that he [the PM] had to rush the terror laws through parliament for the arrests to be effected - and perhaps people would like some kind of justification for that? (But if you were to actually do any research, Jim, I guess it would take more than the normal 15 minutes it takes to write your waste of ink, sorry, column. And what's more, why let the truth stand in the way of some more pointlessness?)

And now for a few Jimbo inconsistencies: Hey Jim, funny that you give the good "award" to those federal and state agencies - one of them wouldn't be ASIO would it? I thought you thought (in your paranoia - where's the evidence?) ASIO was bad: "…we now have ASIO running the country, giving secret briefings behind closed doors, which will alter forever our whole social and civic fabric."

We have been regarded as one of the great liberal democracies where civil liberties would never be betrayed. Well, the terrorists have won the battle in Australia – our national leadership team met and imposed draconian legislation on us all on the basis of fear.

Remember the Queensland Government's campaign telling us to look for suspicious bags on railway platforms and trains? It cost us $800,000. One of Australia's security risk experts pointed out to me this week that both Central Station and Roma St Station still have lockers for bags. I would have thought that if suspicious bags on trains were cause for a terror alert, we would remove any place where terrorists could place bags with explosives. I will not tell you the words the expert used, but "incompetent", "stupid" and "a joke" are mild versions of what he had to say.

So should we or shouldn't we have ads alerting us to the dangers of terrorism? I would have thought, given your tone and previous column, you'd say "no". But, we should remove lockers for fear of bombs… wouldn't mean the terrorists had won? Don't think about it too hard (i.e., just give it your usual consideration) because I wouldn't want you to suffer cognitive dissonance.

Ps. You probably actually misunderstood the security expert. Most likely he had read your previous columns and was actually referring to you.
Posted by Theo Clark at 9:00 pm