Discombobulated by Deleuze, I was left dazed and confused 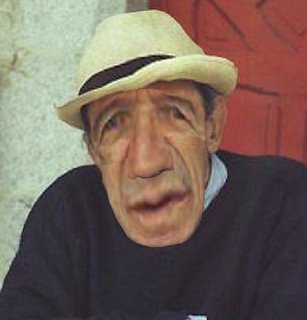 The following serves to shed some light on my aversion towards continental philosophy and cultural studies in general. (If this doesn't serve sufficiently - click on the "Social Text Hoax" link to delve deeper into my psyche.) This Gibberish is a completely fictitious* conversation I "had" with Dr. Alberto Toscano and blogger (soon to be Dr. too) Glen Fuller on Deleuzian method (named after Gilles Deleuze - pictured).


(*Made by cutting and pasting text from Glen's blog as well as inserting my own comments - this conversation never happened - one would have to be bereft of any level cognition to treat this "conversation" with any seriousness - irony very much intended.)

Alberto: The criticism of our time... is indissociable from an investigation and experience of its transcendental field(s), of the (impersonal) tendencies and haecceities which traverse it, as well as the potentialities, utopian ones perhaps, with which our present can be composed. This 'geological' aspect of 'total critique' is of course essential to a dislocation of the present as atrophy and stultifying repetition of doxa.

Glen: (To Theo) Don't be too hard on yourself. (To Alberto) I imagine 'enthusiasm' as an impersonal (or 'pre-individual', but dividuating) tendency. Bourdieu's work is invaluable for constructing the trancendental fields within which enthusiasm is suspended. A haecceity is the singular 'thisness' of a block of space-time, the 'coming' part of a becoming, which can be defined as event.

Alberto: Give it a go Theo. Just grab a Thesaurus and let it rip.

Theo: I doubt I have the time; the flaming golden orb-sphere of the sky is a mere quarter arc-minute from fulfilling its destiny, as prophesised by the BOM, viz moving in the perpendicular (negative), nay, the "vertical" (through the aether), ebbing, fading, eventually vanishing behind the distant horizon. (Though, through one's remembrance of elementary planetary cogitations, one realises the illusory nature of this "event"; it is perceived this way, through mere mortal eyes [stranded, ineffectually, upon terra] due to the effectuation of the ''Geo" rotating about its axis.) Sincerest apologies if I have been somewhat prolix and circumlocutory in the articulation of my rationale behind the crux of my temporal conundrum, apropos to synonym identification for one's oral phraseology. But without careful and well-considered ratiocination one is liable to be misinterpreted - especially in light of recent breakthroughs in pre/post-modern, Über neo, semi-feminist, textual analysis.