The Secret of Michael Leunig's Success 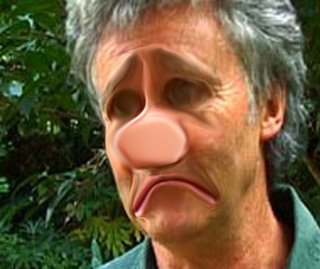 As can be seen from this candid portrait of Australia's Greatest Cartoonist and Living Treasure Michael Leunig, he is the inspiration for his characters.

They're all pathetic, they are all identically rendered, they all have big noses (real creative breakthrough there), and they are all miserable, sanctimonious sods.

In short, they are all Michael Leunigs. Leunig, the LAME cartoonist.

More Leunig:
Michael Leunig: Fake but True, and True but Fake
Michael Leunig - A Portrait of the Artist
Posted by Jef Clark at 9:29 pm