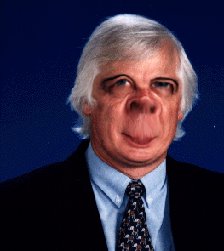 Humbug! reader Ben pointed me towards this piece of pontificating by Ian Plimer, in The Australian (5th Jan 2006) Global warming a damp squib which uses a few diferent fallacies. Of note is False Positioning, compounded with Stacking the Deck. I've posted on False Positioning already wrt global warming so I won't revisit it. One other nice little bit of flawed reasoning, however, is:

… and in 1997 Chris Rose of Greenpeace maintained the religious mantra with "Time is running out for the climate". We've heard such failed catastrophist predictions before. The Club of Rome on resources, Paul Erlich on population, Y2K, and now Greenpeace on global warming.
This argument is flawed but is not easily classified (it could be seen as a False Analogy, Unfounded Generalization, or just "What does Y2K have to do with global warming?"), - but I'll argue that it’s actually an example of Poisoning the Well. The metaphor is that any "water" (idea) taken from that "well" (source) is poisonous (tainted, of no value).

At first this might not seem to be a particularly clear example - it's certainly not in the "classic" form. Putting it simply, the failed predictions of Y2K * and a population explosion are not in any way, shape or form, related to predictions of global warming. But by linking them together he implies that all "catastrophist predictions" are the same. Ie, any prediction of "doom" is going to be wrong. The classic "poisoning the well" is when an advocate seeks to undermine an opponent's position by linking the position to an original source which is denigrated. The difference here is he links the position - global warming - to denigrated predictions of catastrophes.

He should have gone "the whole hog" and linked them to the failed predictions of the "end of the world" by the Church of the Subgenius - who predicted:

...that on "X Day" [5th July 1998], the end of the world will occur. At 7 AM, "the Men from Planet X, or XISTS, will arrive on Earth, close a deal with "Bob," rupture the card-carrying Ordained SubGenii up to the Escape Vessels of the Sex Goddesses, and destroy the remaining population of Earth, VERY VERY SLOWLY." Bob is J.R. Dobbs, leader and High Epopt of the Church of the SubGenius, Living Avatar of Slack, the Saint of Sales. He was responsible for founding the Church on a shifting, sandy beach of hypocrisy." ^
But this would be a little too obvious. Linking global warming predictions to failed "scientific" predictions makes his point, on the surface, seem reasonable. But it is, in fact, a simple rhetorical device designed to win an argument, not to "seek after truth".

* I shall ignore the fact that this fails to take into account that, perhaps, the warnings of Y2K led to companies and computer manufacturers upgrading their computer BIOSes and operating systems.

^ Their prediction was wrong also - since X day did not materialize, they say: we're still here -- a little shaken, perhaps, and re-evaluating the interpretation of PreScripture... Further study indicated that we have been given a reprieve. The artifact on which the date was written was accidentally inverted; the end of the world will really happen in 8661 CE!
Posted by Theo Clark at 8:30 pm