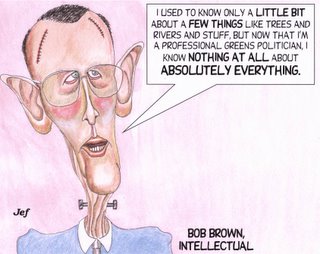 This caricature/cartoon captures something of my skepticism about the self-indulgence and grandstanding of minor political celebrities who have no chance in the foreseeable future of forming a government.

There is an inescapable fallacy at the core of such posturing - Burden of Solution, which we define in Humbug! as follows: "(the) advocate denigrates a suggested solution to a problem but fails to provide a viable alternative".