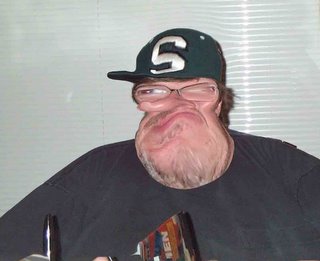 … but his lengthening nose and grumpy expression, a trademark of all liars, gives it away.

"Despite achieving some success, they don't really believe in their hearts that they're worth very much. They always have to exaggerate in an attempt to be the center of attention, to have people admire them, to feel good about themselves."

(I wasn't sure if it was really necessary to do a distoratature of Moore, but I did one anyway.)

What really upsets me about Moore, more than the asinine Moore-ons who credulously swallow his every contention, is the fact that I was once one of them. Before Bush was first elected I used to watch his show The Awful Truth week in, week out, enjoying it thoroughly, root'n for "the little guy" who Moore so admirably and humorously stood up for. Then I saw Bowling for Columbine which I thought was great, it confirmed everything I already "knew" about those gun crazed seppoes. In one scene Moore shows Charlton Heston to be completely heartless. Heston holds an NRA gun rally just ten days after the Columbine school massacre, one town away. "At this rally", Moore shows Heston making a speech, in which he lifts a gun over his head and says: "… from my cold dead hands."

As I've said before, Moore doesn't like letting little things such as the actual Truth, ruin his Awful "Truth". This is why Moore upsets me so. I see guns in homes as completely unnecessary (except if it is required for one's livelihood). So Bowling for Columbine is preaching to the converted in my case. However, Moore treats us with contempt. The main fallacy I will cite him for here, is Misuse of Information*. In his "documentaries" he manipulates footage and facts, mostly through omission and historical revisionism. His predominant method is rearranging a sequence of events (and footage) or joining disconnected events (and footage) to suit his own ideology. Moore does this in everything he does. Without going into detail, here is actually what happened after Columbine.

The NRA is a non-profit organisation, and as such, by law, each branch is required to have an AGM. At the Denver meeting Moore attacks a callous, the NRA cancelled all events (which normally go over several days) except the AGM for voting members (which, again, by law they had to have). Thus we have Moore's omission. Moore's other tactic is to use a sequence of (disconnected and rearranged) events. Heston's "cold, dead hands speech" which, as depicted by Moore, seems to lead off the Denver meeting happened in Charlotte, North Carolina a year later. It was a gesture of gratitude to a gift (the gun). Now don't get me wrong, the whole lifting of the gun above the head and the "cold, dead hands bit" makes Heston a bit of a clown, but what Moore does to him is unjustifiable. His outright lie and hatchet job on Heston is unforgivable. (Here's Moore's defence, and as you'll see, he tries to justify his approach, saying it all happened. Yes I did Mike, just not in the order you imply it did, and where you imply it did. Thus he refuses to acknowledge his deliberate misuse of footage to paint a false picture of Heston.)

Is this technique a "one off"? No. In F 911 Moore is at it again. Bush's speech at one point in the movie: "This is an impressive crowd of the haves and have mores. Some people call you the elite, I call you my base." Of course, in its actual context, it turns out that Bush was being self deprecating:

The Al Smith Dinner may have been the liveliest show in New York last Thursday, as presidential candidates George W. Bush and Al Gore donned white tie and took turns poking fun at themselves and each other in speeches that at times had the audience, and Archbishop Egan, in stitches.

There is far too much refuse from Moore for me to cover, and it's been done by others. My point regarding Moore is that every bit of his work tends to be is distorted, twisted, and carefully selected to fit the worldview of a disingenuous Ideologue. So, yes, there may be some truths in his work, but how is one to tell? And if one can't tell, then all his work is not to be bothered with, unless it makes you feel superior to everyone else, which is the only reason people would still believe him.

Some people soothingly say that one should relax about all this. It's only a movie. No biggie. It's no worse than the tomfoolery of Oliver Stone. It's kick-ass entertainment. It might even help get out "the youth vote." Yeah, well, I have myself written and presented about a dozen low-budget made-for-TV documentaries, on subjects as various as Mother Teresa and Bill Clinton and the Cyprus crisis, and I also helped produce a slightly more polished one on Henry Kissinger that was shown in movie theaters. So I know, thanks, before you tell me, that a documentary must have a "POV" or point of view and that it must also impose a narrative line. But if you leave out absolutely everything that might give your "narrative" a problem and throw in any old rubbish that might support it, and you don't even care that one bit of that rubbish flatly contradicts the next bit, and you give no chance to those who might differ, then you have betrayed your craft. If you flatter and fawn upon your potential audience, I might add, you are patronizing them and insulting them. By the same token, if I write an article and I quote somebody and for space reasons put in an ellipsis like this (…), I swear on my children that I am not leaving out anything that, if quoted in full, would alter the original meaning or its significance. Those who violate this pact with readers or viewers are to be despised. At no point does Michael Moore make the smallest effort to be objective. At no moment does he pass up the chance of a cheap sneer or a jeer. He pitilessly focuses his camera, for minutes after he should have turned it off, on a distraught and bereaved mother whose grief we have already shared. (But then, this is the guy who thought it so clever and amusing to catch Charlton Heston, in Bowling for Columbine, at the onset of his senile dementia.) Such courage.

Still, at least Moore isn't a crazy as this guy. I wonder if pseudologia fantastica is contagious?

* Though he frequently is guilty of Stacking the Deck, Observational Selection, False Positioning, Personal Abuse, Browbeating, False Analogies, False Attribution, Impugning Motives, okay, I'm sick of listing almost every fallacy we cover, but you get the picture.