Appeal to eminence; appeal to "the great and the good". 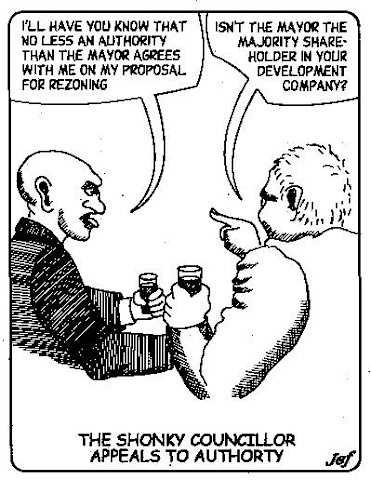 This fallacy in reasoning occurs when an advocate appeals to an "authoritative" person or agency in support of his or her own viewpoint, based solely on that person's authority. The authoritative source may have some prominence in the field under consideration or the person/agency may be prominent in an unrelated field. In the latter case, the gullible advocate is relying on the generalized "eminence" of the authority in an attempt to sway the opponent, rather than the presumed expertise of the authority.

Bryan Bladderpocket is an academic with an interest in social policy. He is giving a seminar on multiculturalism to a small group of postgraduate students. One of the students, Mark Gonzo, says: "You claim you're an advocate of multiculturalism, but you're not really - any immigrant group which doesn't conform to liberal middle-class values is anathema to you. Many values of many different cultures conflict with Western conceptions of human rights."

Bryan (the advocate) replies: "I don't accept your point – just last Wednesday, Sir Ernest Willynillly wrote in his opinion column in the East Coast Thunderer that the norms of all known cultures are consistent with universal human rights – and I shouldn't have to remind you that Sir Ernest is a Nobel Prizewinner."

Bryan has cited Sir Ernest Willynilly's views on human rights in support of his own position. What he hasn't said is that the Nobel Prize Sir Ernest won was for Physics. In such a case, there is no reason for presuming Sir Ernest's views on any social issues have any more weight than anyone else's views.

The seeker after truth is in principle unimpressed by the prominence of the person expressing a viewpoint on an issue. Even if Sir Ernest did have qualifications in relevant social research, Mark would be entitled to be skeptical about his opinions. Without explaining why an authority holds a particular viewpoint, an advocate's argument is weak. Further to this, there are many historical examples where the consensus views of experts in a field of inquiry have been completely overturned in the light of later investigation.

Journalists and editorial staff in the news media often seek the views of "eminent persons" for no better reason than their availability and visibility. Journalists are under pressure of remorseless deadlines. Television, Print and online media proprietors are naturally concerned with ratings, circulation figures and page views respectively. Under such circumstances, it is not surprising that the lazy option is often taken – contact one of the "usual suspects" who can be depended on to comment with affected gravitas on any subject. Preferably a public figure who is popularly seen as humble and self-effacing despite having ruthlessly collected honours, distinctions and personal wealth all his or her working life.

The skeptical viewer will realise (for example) that when Sir Dean Sillybilly, an obscenely rich former supreme court judge and retiring Governor of New South Holland is pontificating on remedies for the plight of the poor during a valedictory television interview, he is more likely to have been part of the problem than part of the solution.

Similarly, the skeptic will realise that when the recently and widely acclaimed Father of the Year – Justice Gustav Flatus OAM, presumes to lecture the rest of us on child-rearing practices, he may not be doing so from credible standpoint. Despite his recent honour, he may not in fact be an exemplary parent. He is in a position to pontificate on parenting because he has managed to achieve a high level of visibility in the community through his "non-fathering" activities. Perhaps he has actually been a workaholic absent father whose long-suffering wife has had to be both mother and father to their children. There is no way of knowing for sure. But we do know that some past recipients of the "Father of the Year" award have put their own careers before the needs of their children.

The prominence of a person is evidence that the person is capable of securing prominence, quite possibly through a meticulously planned, single-minded campaign of self-aggrandizement. It is not evidence that he or she speaks with genuine authority on any matter.

When an advocate appeals to an authority, they are fallacious unless they explain why and how the authority has come to their view.
Posted by Theo Clark at 1:11 pm