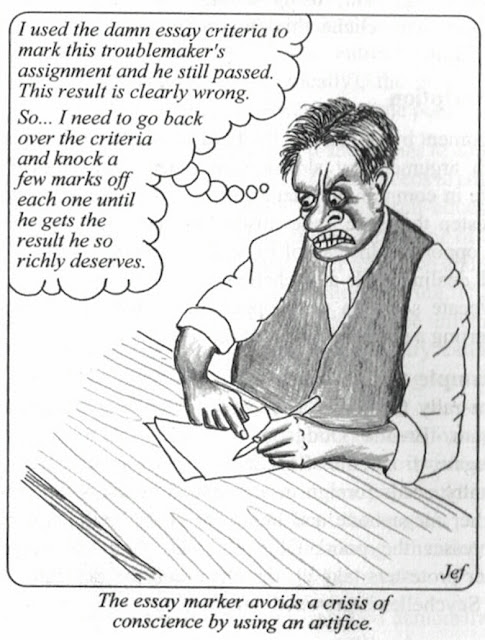 The conclusion is all, and drives the argument. In order to make a case the advocate puts forward contrived, convoluted and unfounded assertions which any fair-minded and objective observer would perceive as artificially constructed. The reasoning may be specious, tendentious, flawed in logic and unjust in effect.

Noel Maggot is the Director of Finance for the Faculty of Health at the University of Wooloomooloo. Noel is a bitter man, in part because no-one takes the trouble to pronounce his unfortunate surname correctly. (He insists it is French in origin, and should be pronounced "Mahjay".) Mr Maggot is writing a letter to Ivana Bugarov, formerly a lecturer in occupational health and safety in the School of Nursing at Wooloomooloo. The letter begins:


This is to inform you that the Faculty of Health will be asserting that it has a right to royalties on revenue generated by your leg-pulling device. Our legal office has determined that although you patented the so-called Bugarov Leg-Puller two years after you resigned from the University, you must have conceived the design of the device while an employee of the university. Further, it has been established that one of your lectures dealt in part with the therapeutic application of traction to sports injuries to the tibia and patella. Given this history, the university legal office has determined that you were not entitled to take out a patent on this device.

Devious and mendacious advocates such as Maggot attempt to use any number of self-serving obfuscations to achieve their ends – in this case an unearned financial benefit for the University. This is consistent with his role. As Director of Finance, he is tasked with earning an additional 1.5 million dollars for the Faculty of Health each year. If he fails, he will be sacked. So he is always driven by the bottom line, and his "arguments" are always self-serving. More often than not, they are also shonky and disingenuous. At times they are risible.

He was appointed to his position as Director of Finance not because he had a background in research and scholarship, but because he had made lots of money in all his previous positions (telemarketing of skin-care products, car sales, time-share real-estate, and pyramid marketing of magnetic underlays).

In the present case, and if his bullying is successful, he will ensure that the intellectual property produced by the creative mind and hard work of an individual is appropriated by an entity (the university) which made no contribution to the work.

The question of whether or not the university has valid legal grounds for its claim could only be tested in a court of law. Given that the legal resources of the university are apparently behind Maggot's claim, Ivana is unlikely to have her day in court. She would be wary of undertaking a legal defence of her position given the high cost of civil litigation and the uncertainty of the outcome. Whatever the legal position, it is clear that an artifice has been used to bully Ivana into submission.

Insurance companies produce documents designed to avoid paying out claims on policies based on cleverly worded definitions and exemptions, such as flooding and what constitutes the contents of a house. For example, a home and contents insurance policy advertises coverage of accidental damage, loss or theft of mobile phones. But a clause in the policy states the insurer must be provided with proof of purchase of the phone before making a claim, and that a police report and proof of purchase with the claim is insufficient.

Technology manufacturers create warranties that rule out nearly all forms of faults with their devices. A headphone manufacturer, for example, has a two year warranty on it's headphones that excludes any accessory that comes with the headphones. "Accessory" is defined as nearly all the parts that make up the headphones, the extension cable, the volume and playback controls, the rubber seals on the ear-buds etc.
Posted by Theo Clark at 8:24 am