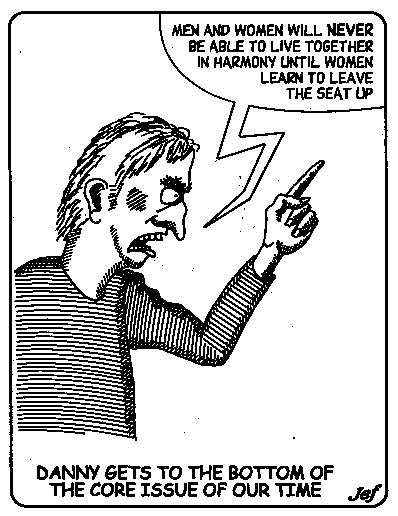 The advocate expresses the view that because there is a dispute between experts in a domain of knowledge, the entire field of scholarship (or at least the specific issue in dispute) should be rejected.

Graham Flatliner is eating with gusto his second bacon and egg burger of the day. His concerned workmate Ed Fuddy is witnessing his consumption. Ed is finally moved to remark: "I don't understand how you can eat so much of that... I feel ill just imagining the way the cholesterol is coating your arteries. If you keep eating like that, your high level of cholesterol means you will get heart disease and keel over before you reach fifty."

Graham responds: "That's not true. I was reading about a doctor in Sweden who is an expert in heart disease. He recently completed a study in which he found no link between dietary cholesterol and heart disease, so high cholesterol won't give me heart problems. The so-called experts are always changing their minds and they can't even agree amongst themselves. Next year the Heart Foundation will probably recommend deep-fried pork crackling."

Outright rejection of a field of knowledge just because there is some level of dispute in the field is fallacious. After all, any field of inquiry advances through a degree of dispute and debate. At times, professional disagreement even at the margins can lead to rivalry and hostility. When such disagreements become public, non-specialists may be dismissive of the whole field. This is not an appropriate position for the seeker after truth. The critical thinker does not dismiss anything out of hand. He or she examines an issue and makes judgments consistent with the revealed facts.

In the present example, and if Ed were a seeker after truth, he might ask Graham for the details of the Swedish research paper. In the meantime, he could point out to Graham that it is the weight of evidence that matters when individuals are trying to make healthy lifestyle choices. He could explicitly reject Graham's position by pointing out that Graham is exaggerating the degree of uncertainty in research on the role of dietary cholesterol in heart disease. The reasonable person will not regard uncertainty in any field of inquiry as a problem. Uncertainty is far better than dogmatism or unjustified certainty. However, lack of absolute consensus does not mean that "anything goes".

Another fallacy examined in this book, false dichotomy, may at times be difficult to distinguish from exaggerated conflict. The key feature of exaggerated conflict is the tendency of an advocate to dismiss a field of inquiry because of a false claim that "the experts" are in complete disagreement.

If the experts are in complete disagreement, then it is appropriate to reserve judgment about the issue, or to make a provisional decision one way or the other, while remaining open-minded and ready to change a decision as more information emerges. Note that "sitting on the fence" on an issue pending more information is a perfectly respectable position for a seeker after truth to take.
Posted by Theo Clark at 11:28 am