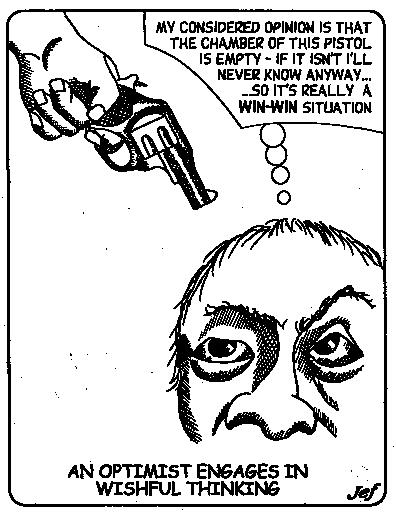 The "classic" version of this fallacy is the common case where an advocate will not entertain the possibility that an opponent's argument is correct, because if it is correct there will be adverse consequences.

Margaret Chemise says to Claude Nads: "I was reading about a sociologist who has found that there are differences in the average intelligence of different racial groups. She found this out by conducting what she claims was a culturally neutral IQ test." Claude responds: "Well she must have got it wrong. There isn't an average difference in IQ between different races of people because if there was, it would allow bigots to justify their racism."

He reasons that differences in IQ between racial groups must not exist, because if they did exist it would adversely affect race relations. In doing so he is making an unjustifiable assertion. He would be better off addressing his core concerns about race relations by engaging in subtle and complex arguments about: (a) whether or not culturally neutral IQ tests can ever be constructed; and (b) whether statistically significant differences between populations are relevant to public policy. In the end, there may be an argument for not conducting IQ tests across racial and cultural groups, but there cannot be a reasoned argument for simply declaring á priori that there are no differences in IQ.

The key factor here is not whether the proponent agrees or disagrees with a study, assertion, argument, proposition or conclusion (because of what it says). It is the quality of the reasoning behind the agreement or disagreement, (why it says it) that is important. If the reasoning boils down to a general case of the following form: "X cannot be true because it ought not to be true," (or "Y must be true because it ought to be true") then the wishful (non)thinker is wallowing in the fallacy and fantasy world of argument to consequences.

A pernicious form of the argument to adverse consequences fallacy occurs when researchers engaged in some form of advocacy research, assume that results which do not agree with their cherished hypothesis cannot be "true". The individual in such circumstances is forced to contemplate a very unpleasant proposition, which might be put as follows: "My career to date has been based on false assumptions, and I have therefore wasted years of diligent effort."

Under such circumstances, the temptation is for the disillusioned advocacy-researcher to assume some methodological fallacy, rather than to seriously question his or her hypothesis. Disillusioned and desperate researchers redesign and repeat their research until they obtain the desired result. "Failed" surveys or experiments are not of course published in "the literature". Rather, they are discarded and are not ultimately reported to the research community. This phenomenon is sometimes known as "publication bias". Publication bias means that from time to time the corpus of knowledge in a particular discipline is distorted. "If at first you don't succeed, try, try and try again," is probably not an advisable precept for a researcher who claims to be a disinterested seeker after truth.
Posted by Theo Clark at 9:23 am