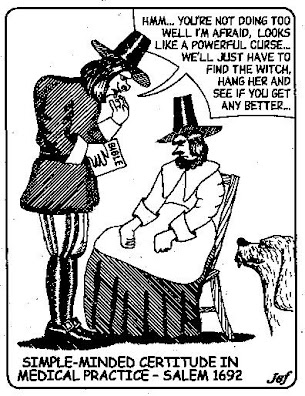 Simple-Minded Certitude is the preferred descriptor in this book for a habit of mind which is commonly labelled intransigence. Simple-Minded Certitude is an unshakeable belief that will remain unchanged even when indisputable evidence is presented which demonstrates the belief to be false. "Simple-minded" is intended to convey the voluntary use of simplistic reasoning, rather than an "organic" limitation of intellectual capacity. (It is not uncommon for otherwise intelligent individuals to be simple-minded in their approach to a particular topic.)

It is a temptation to accuse someone of intransigence or Simple-Minded Certitude simply because they disagree with us. But this accusation should not be used lightly. If it is used too lightly, then its utility as a legitimate criticism is compromised.

True Simple-Minded Certitude occurs when an advocate has a characteristic mindset that simply refuses to entertain the possibility of being wrong on a matter of fact. Or the advocate, in effect, rules out any possibility of being persuaded to another opinion, whatever the evidence presented by the opponent. Intransigent advocates are deaf to information which might disturb their state of comfortable, implacable ignorance.

Ramone Pust-Yool and Debbie Pust-Yool are getting to know each other after a whirlwind courtship and marriage. Debbie has just disclosed the fact that she would like to have three children. She also states: "…and I'll be giving them natural homeopathic vaccinations, not the poison the government wants us to jab into children."

Ramone is somewhat alarmed at this, and states: "But homeopathy is just 'magic water'? It's 'natural' because it's just water. They dilute the original mixture so many times it doesn't have even one molecule of any actual ingredients. And vaccinations are arguably the greatest and safest medical intervention in human history? We've essentially eliminated a whole host of horrible diseases. Now that people have forgotten what those deceases were like and stopped vaccinating, we risk them coming back and in fact, this has already happened."

Debbie bridles and loudly proclaims: "I don't care what the government and doctors say, they're just in the pocket of big pharma. I know that vaccines are bad and homeopathy is the way to go thanks to the work of people like Jane McCarry."

"Jane McCarry? The ex model-slash-actor? That's your source of information?"

Leaving aside the questions of whether or not government and doctors are all involved in an elaborate conspiracy on the behalf of big pharmaceutical companies to poison our children; and whether homeopathy has any efficacy as a medical intervention beyond a placebo; and whether the views of a model-slash-actor on public health should be taken seriously, let's consider Debbie's Simple-Minded Certitude. (We will leave these questions aside as the answers are, respectively, "No they aren't", "No it doesn't", and "Surely you're joking?".)

Debbie is exhibiting a defensive stance which indicates that she is preparing to enter a state of Simple-Minded Certitude. Her initial statement above is extravagant and emphatic. It seems to be intransigent. If she continues in that vein, she would clearly be exhibiting the fallacy of Simple-Minded Certitude. If, however, her statement is merely an immediate emotional over-reaction, and she then becomes more open-minded and reasonable as the discussion proceeds, she is not fundamentally intransigent.

Ramone's best strategy in the face of Debbie's apparent over-reaction would be to respond with "sweet reason". As a critical thinker, he would focus on the issue without raising the emotional temperature. His response would be mild and measured. He might think: "Uh-oh, I've married a crazed rage-aholic." But he wouldn't say it. He would say something like: "Well, I'd like to look into it... it's a decision for both of us... we should always put the health of our children first."

Pure, persistent Simple-Minded Certitude in the face of incontrovertible contrary evidence is a characteristic of the less reflective and intellectually respectable professions to be found in our community – such as clairvoyants, opinion columnists and celebrities. Consider for example, the common situation where a famous actor (who also happens to believe that they are clairvoyant) decides to write an opinion column and advocates a position in the following form: "If the government does X, then Y will surely follow." In time, the government does X, but Y does not in fact follow. In such circumstances, the more opinionated and simple-minded the advocate is, the more unlikely it is they would admit to error. They will characteristically dissemble, squirm and avoid at all costs the admission "I was wrong".