iPhone - you get it or you don't

The following Samsung commercial takes the **** out of people who line up for iPhones and the like. I find it to be both highly amusing and true to life.
My favorite line: "I could never get a Samsung. I'm creative".

Last week well known Apple evangelist, and blogger at Daring Fireball, John Gruber provided a great example of special pleading when citing a quote in a review of the Samsung Galaxy Nexus in comparison to the iPhone 4S.


You either see it or you don’t. If you don’t, that’s cool, enjoy your Nexus. But I think the reason Apple Stores are so crowded, and getting so big, is that there are an awful lot of people who do see it. 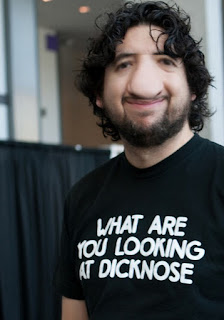 An advocate generally reverts to special pleading when they have no other way of justifying their position. The beauty of special pleading as a rhetorical trick is it gives the opponent no room to maneuver. Gruber has argued that his opponents, Android users, cannot possibly comprehend the subtleties and beauty of Apple's iOS operating system. They are simply unable to attain the level of insight available to Gruber. "You either see it or you don't." He has a deep insight into and empathy with technology that cannot be evaluated by Android users who, by definition (they use Android), lack the capacity to make any valid judgement. How does one respond to that?

This excellent article at Gizmodo points out the irrationality of brand loyalty.